We use "ancient forest" to refer to an area that has long been in forest although that forest itself may have been heavily managed, such as through logging or grazing. All 'primary' or 'old growth' forests are ancient, but not vice-versa. In our landscape, one place where such ancient forests can occur is in old farm woodlots. These lots were kept in forest in order to provide the farm with firewood and timber. They were often heavily cut, but they were not usually completely opened and plowed. Frequently, such lots were particularly rocky, wet, or distant, so that they were also less tempting for cultivation. The map below (Fig. 1) shows where such lots occurred in the southeast corner of the County based upon an early landuse map. 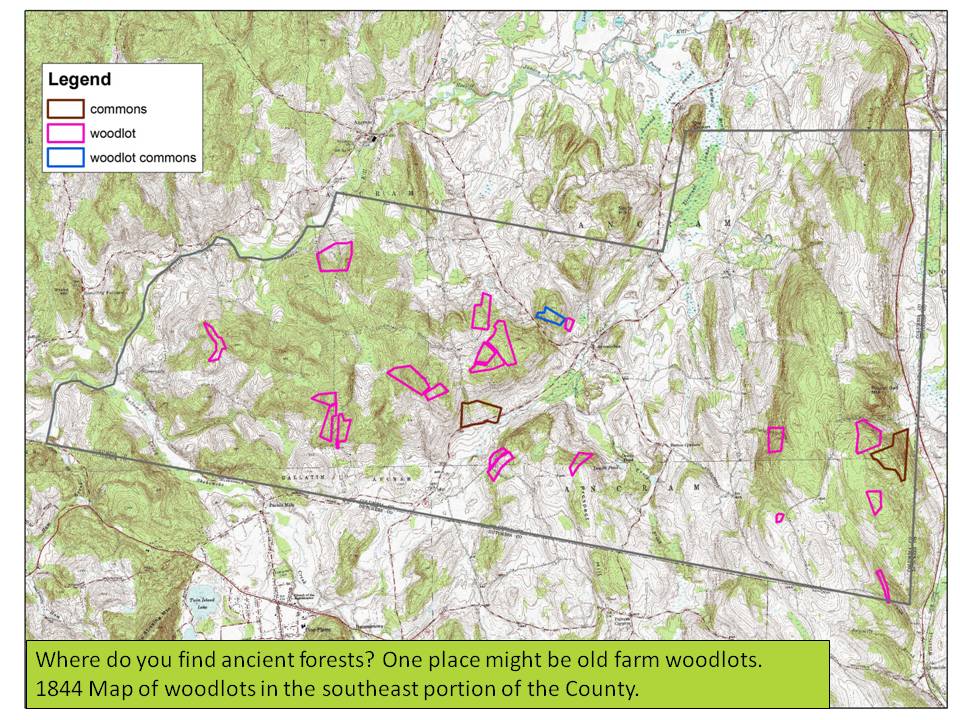 Fig. 1. An 1844 lot map from the southeast corner of the County showing the location of identified woodlots; such parcels tend to be on steeper lands.

While it might have been relatively easy to tour the County in the mid-19th century and identify the woodlots, today may of those lots are hidden by new regrowth. Widespread field abandonment has hidden those wood lots in surrounding younger forests (Fig. 2). 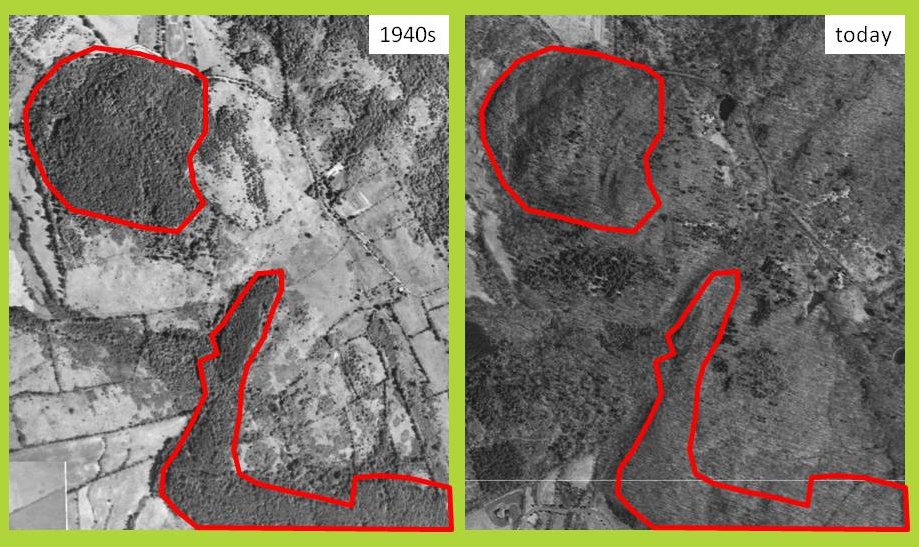 Fig. 2. This pair of photos illustrates how old farm woodlots can become hidden by the regrowth of forest on surrounding fields. The red lines encircle two patches of mature forest on the 1940s aerial; in the modern image, these patches are now part of larger forest blocks.

Because of their less disturbed soils, ancient forests can harbor an array of plants that are absent or rare in younger forests (Figs. 3-5). 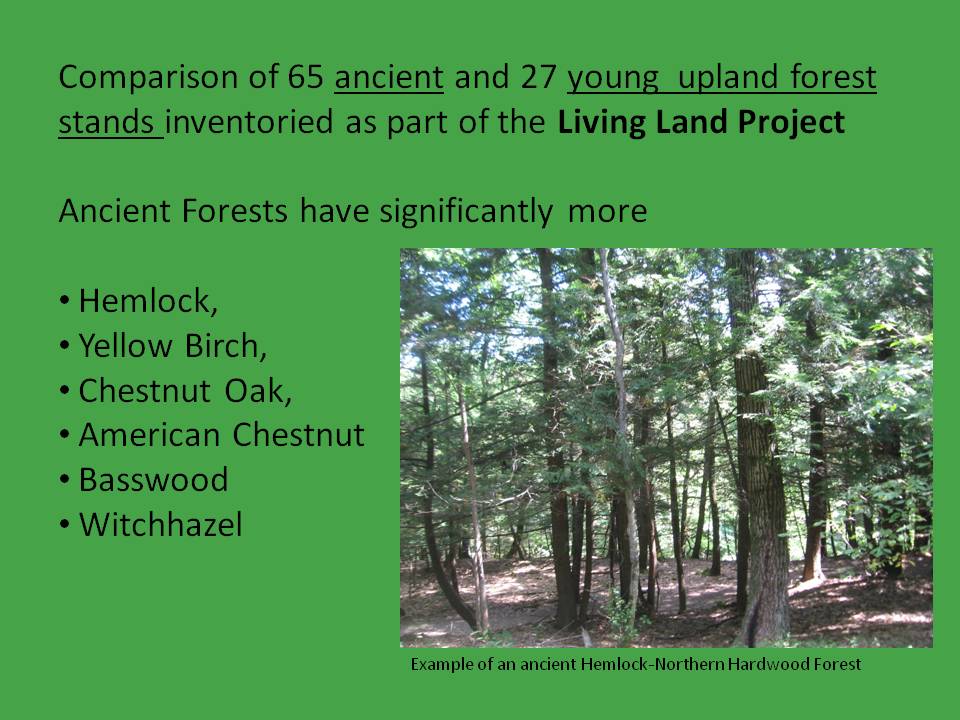 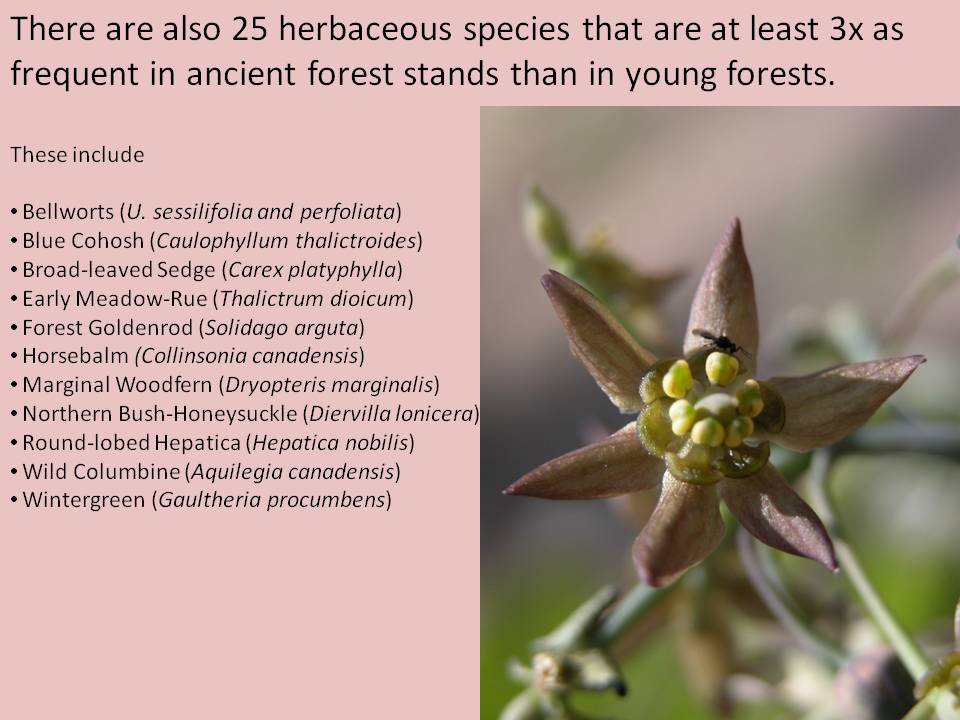 Fig. 4. The herbaceous plants that are noticeably more common in ancient vs. younger forests. 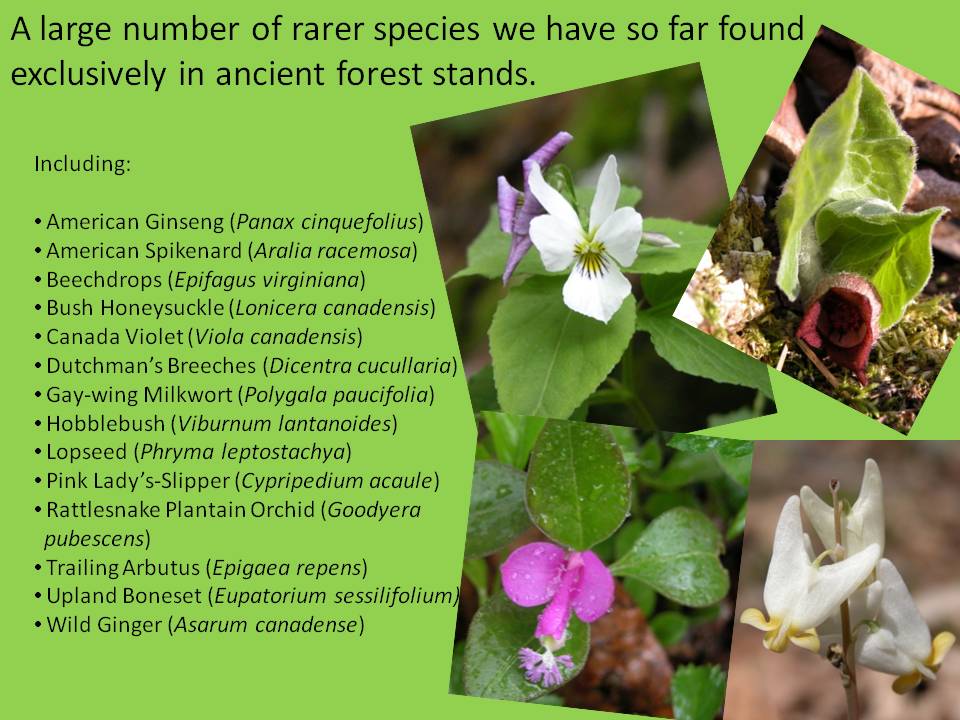 Fig. 5. Columbia County plants that we have, to date, only found in ancient forests.

Aside from the plants, one can also dig into ancient forests, literally. Where the soil has not been plowed, a rich humus layer atop a gradient of soil color develops as the soil acts essentially like an upside-down litmus paper, letting the components of the organic layer leach into it to varying degrees (Fig. 6); although, where worms are present, they can mix these layers, replicating in some ways the mixing of plowing. Although we have the data, we have not yet analyzed our insect information to determine whether we pick up any signals of such forest history in the insect world.

Ancient forests have come under increasing development pressure. As mentioned earlier, woodlots were often on the more remote and/or agriculturally challenging lands of a farm. Today, as people seek ridgetop views and long driveways become feasible and fashionable, some of these woodlots are being opened for housing. The images below illustrate this pattern for central Columbia County, primarily in eastern Claverack and western Austerlitz (Fig. 7).  The first map (Fig. 8) shows the location of putative ancient forest. This mapping is based on the earliest forest cover data we have for an extensive portion of the County, the shaded topomaps from the early 1930s. The hatching indicates the location of the areas mapped as forest at that time. While some reforestation may well have occurred prior to this mapping, any truly ancient forest would have had to be forest at this time. Notice how many of the 'ancient forest' blocks are on higher ground. The following two figures (Figs. 9 & 10) show the distribution of older and more recent houses; as illustrated, newer houses are more apt to be on higher ground and hence in ancient forest parcels. Finally, it is apparent that existing conserved land does not cover much ancient forest (Fig. 11). For this reason, highlighting the location and ecological value of old farm woodlots may be appropriate. 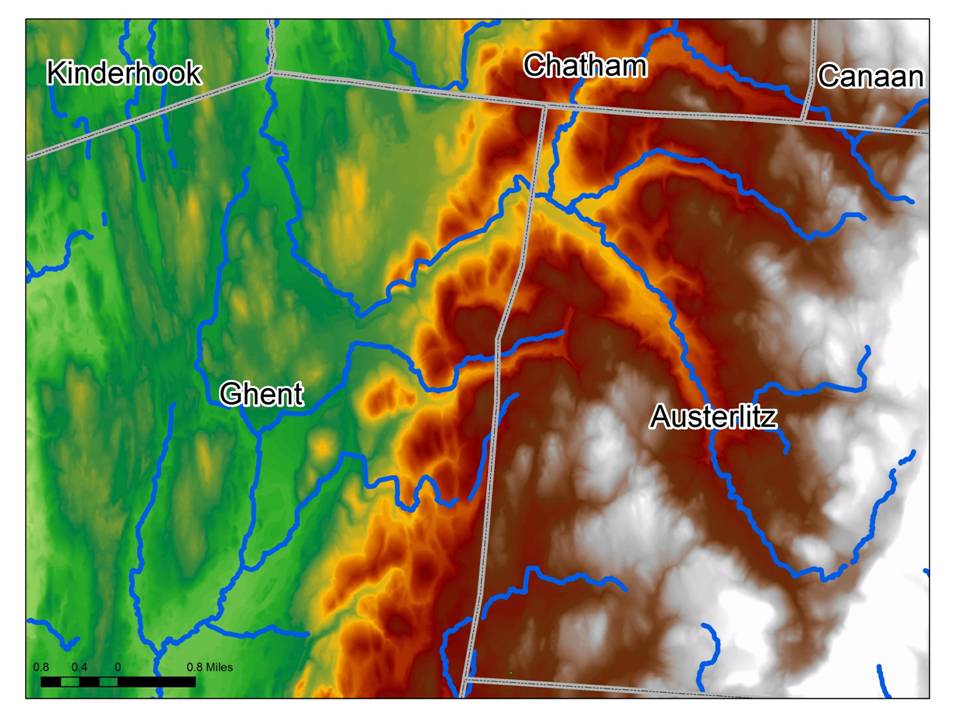 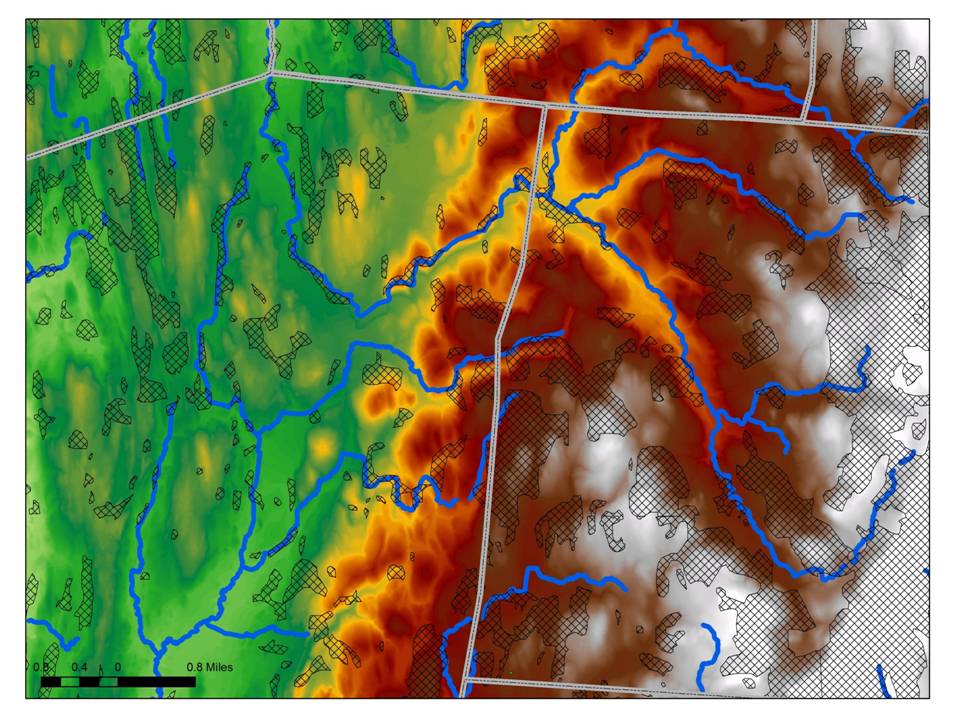 Fig. 8. The location of potential 'ancient forest' (hatched zones) as indicated by forest cover maps from the early 1930s. 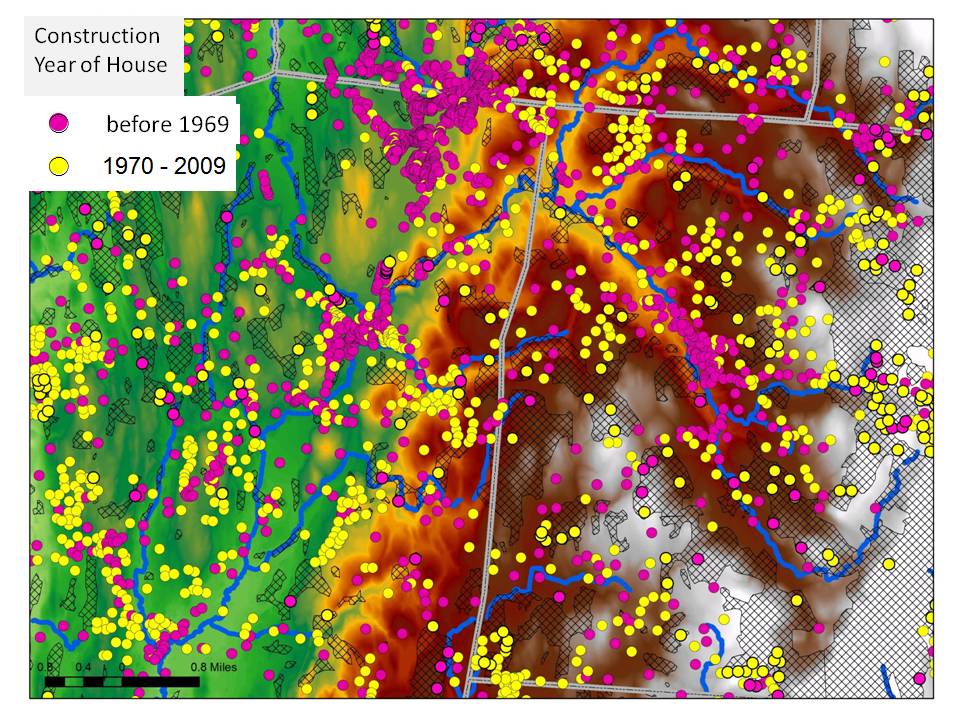 Fig. 9. The location of older and more recently constructed houses (as recorded in property tax files). 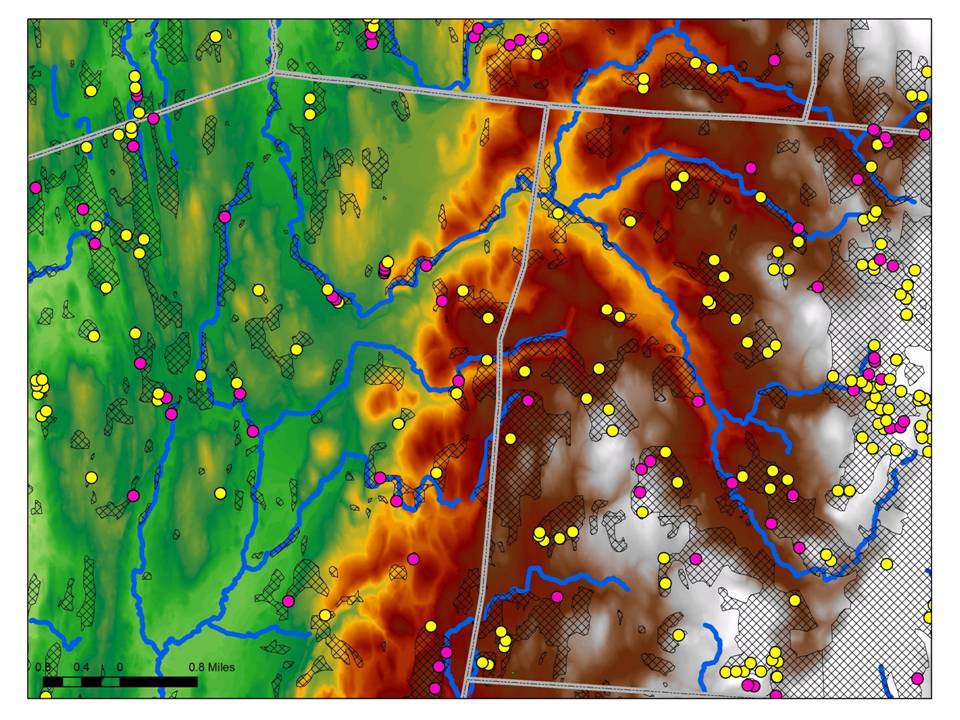 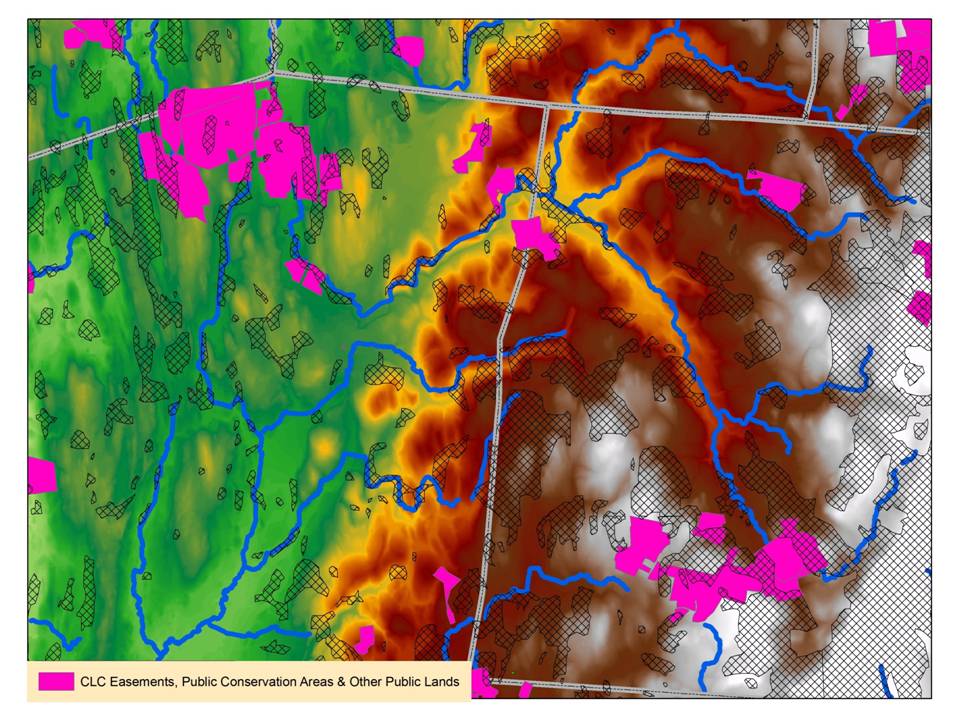 Fig. 11. The location of land under various forms of protection (pink). Note that there is relatively little overlap with areas of potential ancient forest.

Some ancient forests are located in floodplains. For more information about ancient floodplain forests, please visit our page on Floodplain Forests.