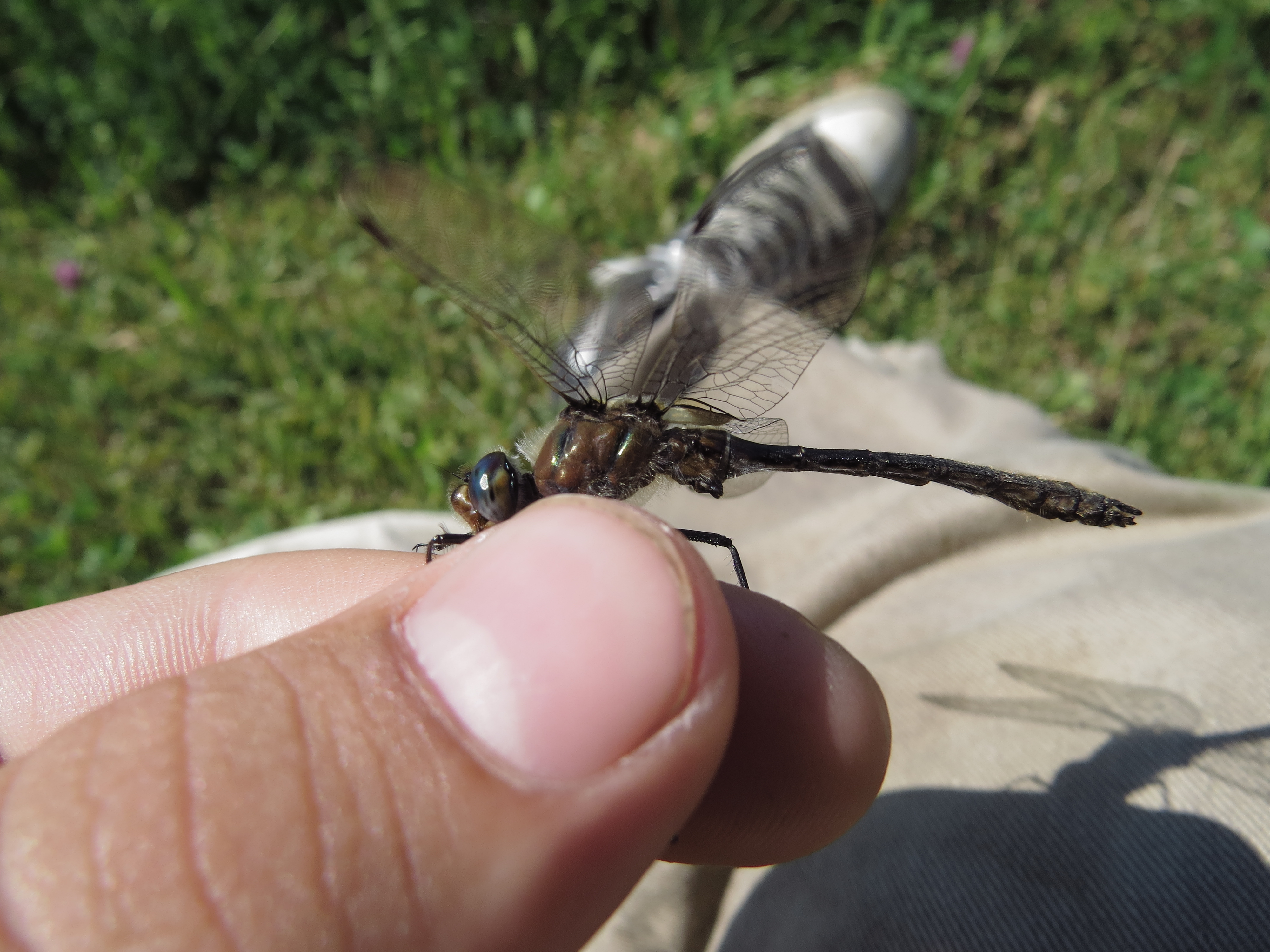 DESCRIPTION: This small (4 1/2cm), dark-brown/black, metallic dragonfly is relatively inconspicuous and can be a challenge to distinguish from other emeralds. Its size and flared abdomen tip help to narrow down the possibilities, however.

BEHAVIOUR/ABUNDANCE: We have only come across eight individual American Emeralds, although it is not of official conservation concern. It is most often found next to still ponds, or over sunny meadows looking for prey. 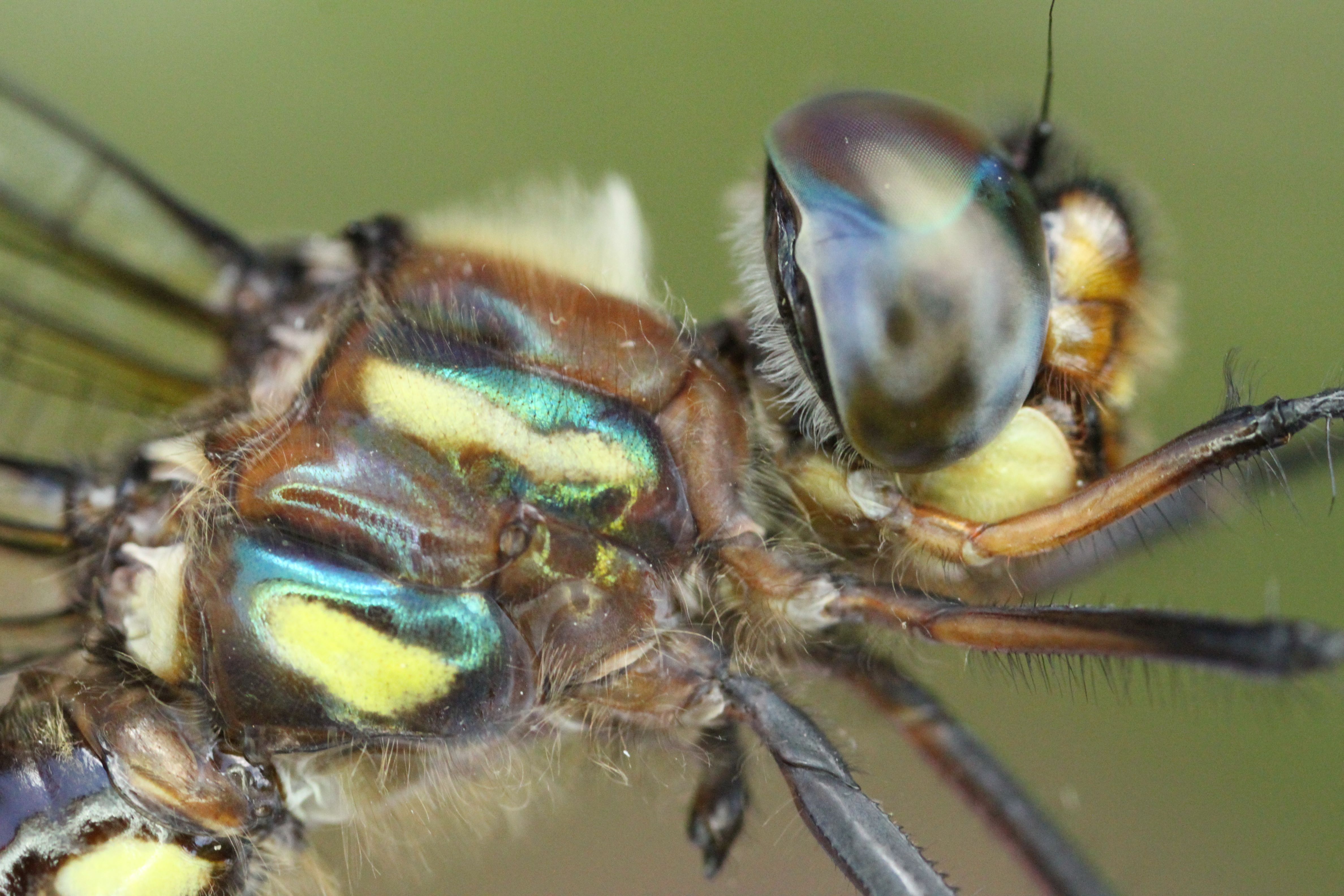 DESCRIPTION: This is a mid-sized emerald with glossy, metallic brown thorax and abdomen and eyes that range from bright green to brown to grey. This species’ one defining characteristic is the easily noticed clamp-shaped structure at the end of the male abdomen, which sets it apart from all other emeralds.

BEHAVIOUR/ABUNDANCE: We have seen only two Clamp-tipped Emeralds during surveys in Columbia County, but state wide it is not recognized as threatened. It can most often be found cruising at the edge of fields and along shady tree lines. 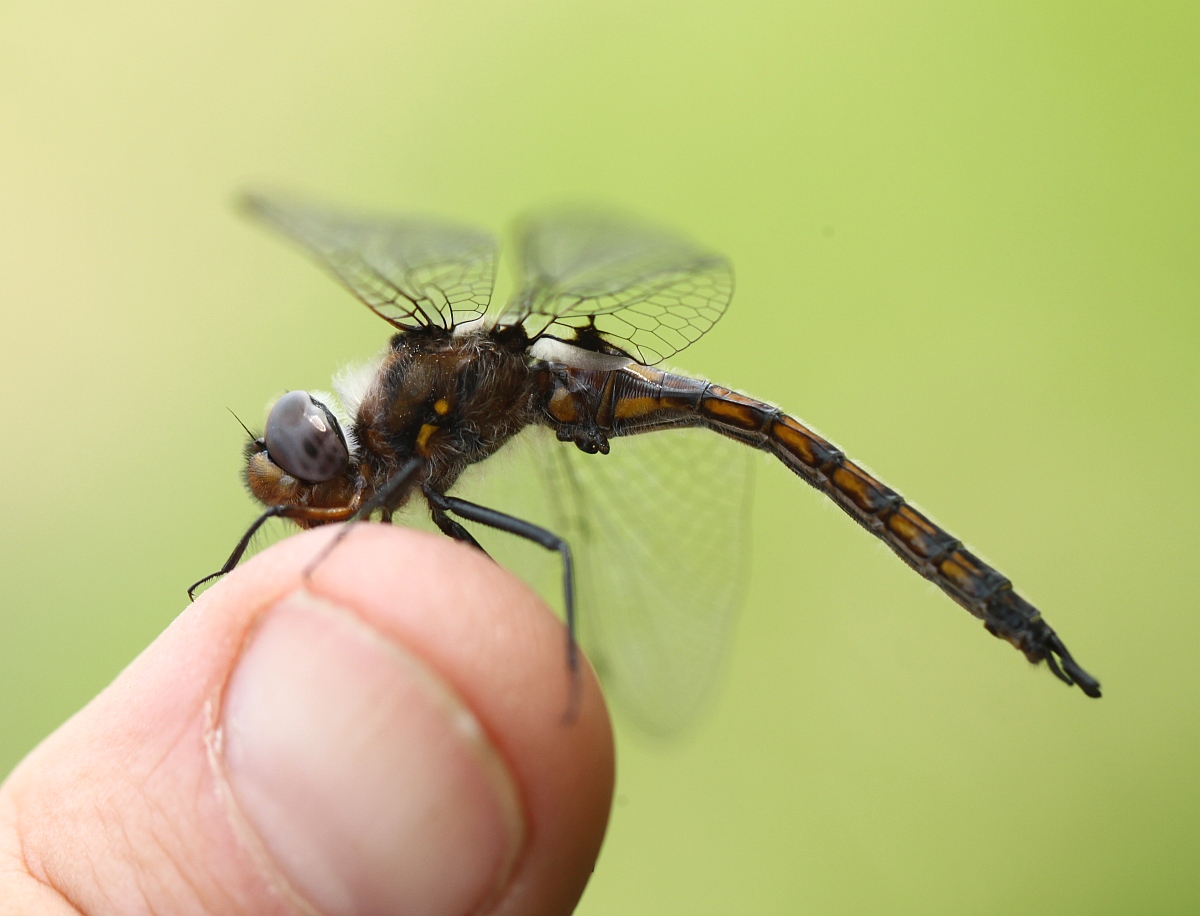 DESCRIPTION: This is a relatively small, non-descript dragonfly with a brown thorax and black abdomen with yellow spots. It is extremely similar in appearance to other baskettails, the only easily distinguishing feature being a small black spot at the base of the hind wing in some individuals.

BEHAVIOUR/ABUNDANCE: We have seen several Common Baskettails in our surveys, although never in large numbers. It is not endangered. Individuals can most often be found around ponds or perched on grasses in neighboring fields. 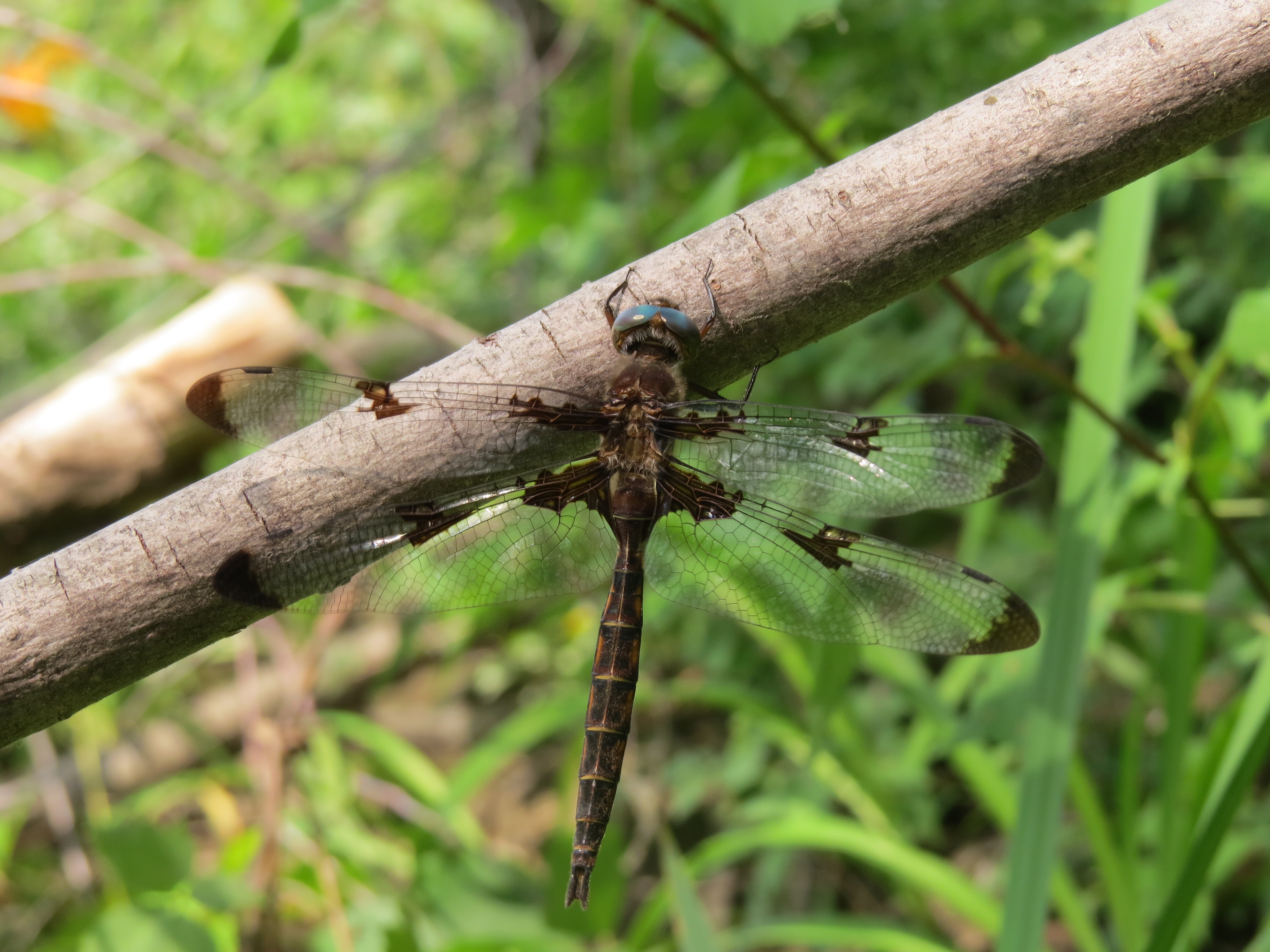 DESCRIPTION: This is an instantly recognizable baskettail, with its black wing markings and bright green eyes.

BEHAVIOUR/ABUNDANCE: We only have one or two recorded sightings of Prince Baskettails, although due to their tendency to hunt at tree-top level they might well be around in greater numbers. It is not endangered. 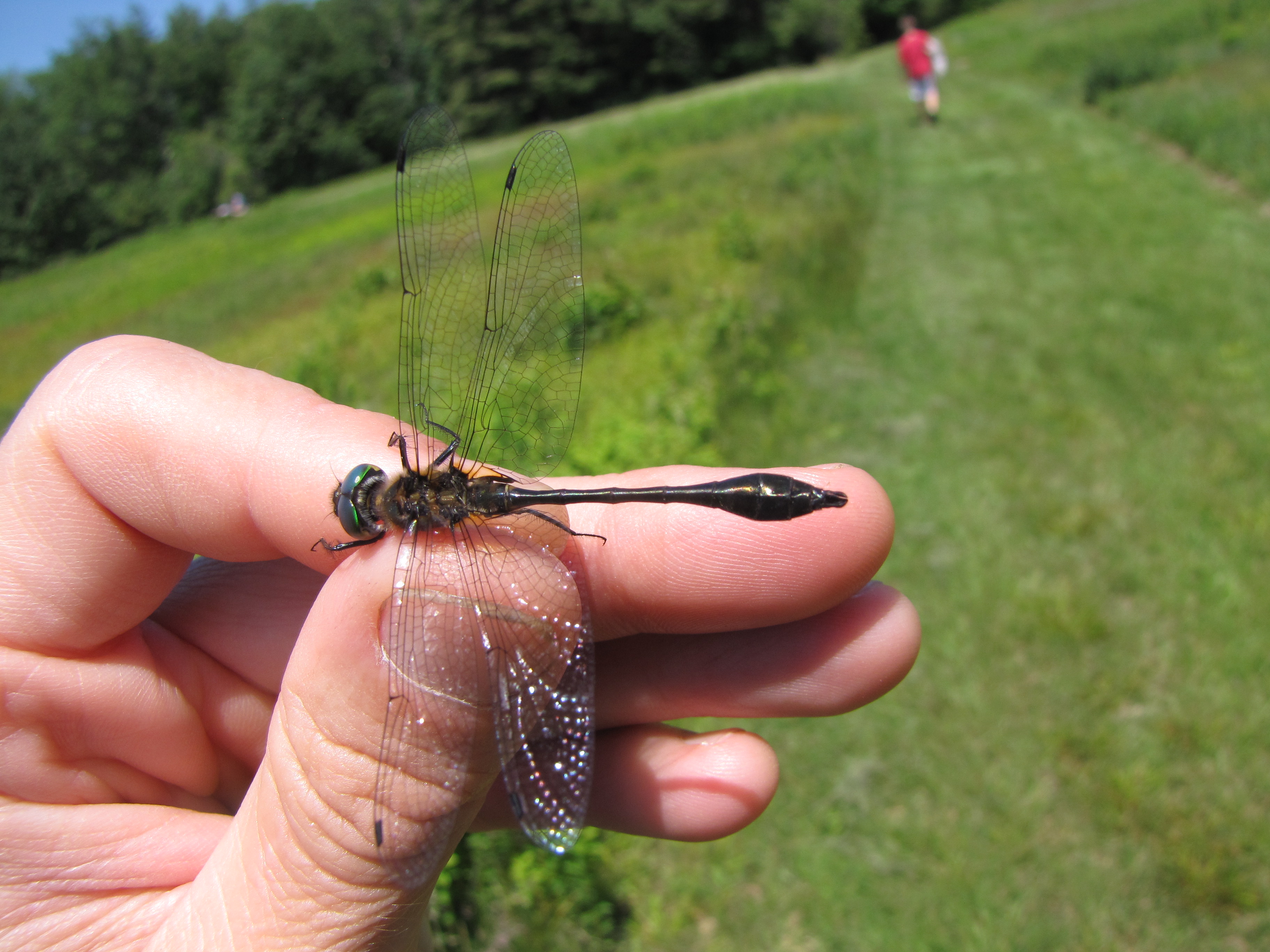 DESCRIPTION: This is an extremely small emerald, with a nondescript black abdomen and brown thorax.

BEHAVIOUR/ABUNDANCE: We have only seen one Racket-tailed Emerald in our area, although statewide it is not considered rare. It can be seen over ponds and bogs, or patrolling along the edges of forests.