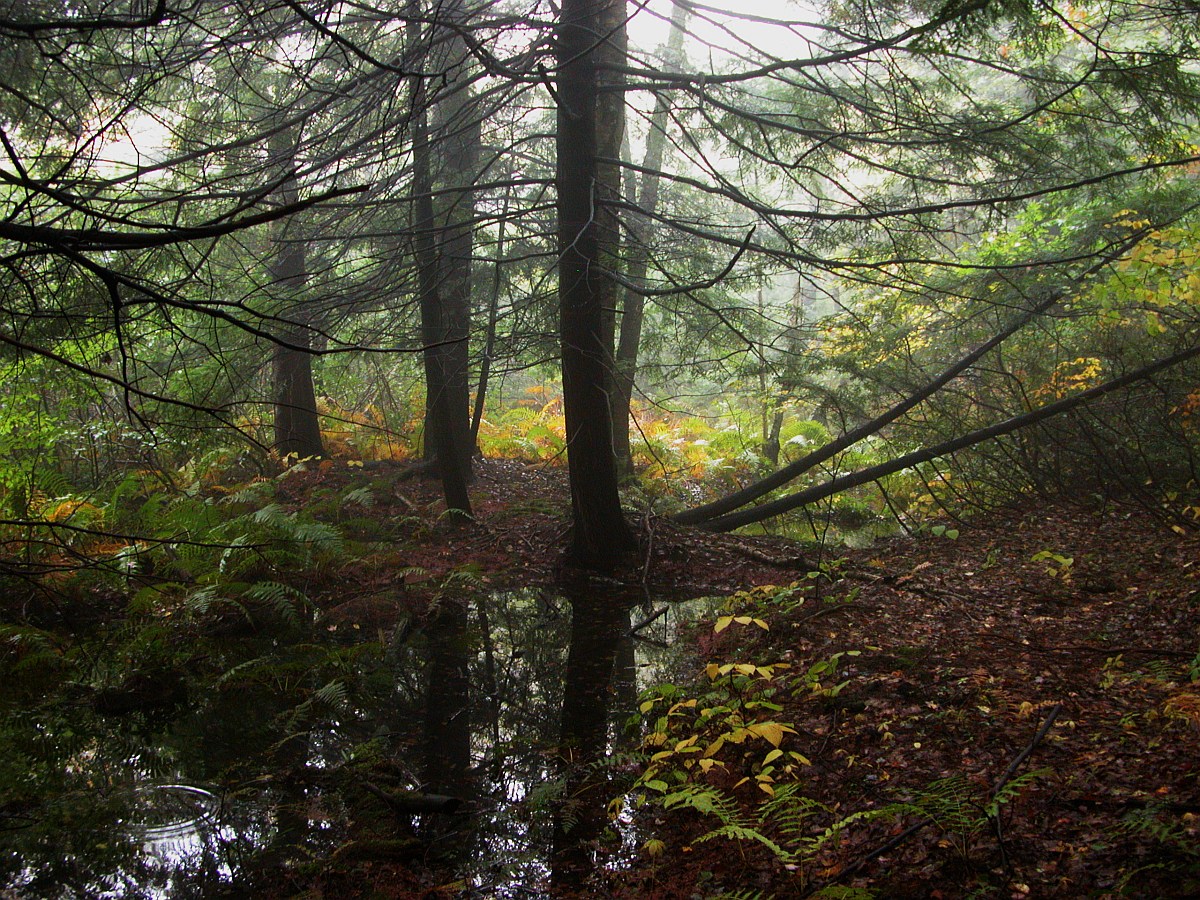 Forests are our homeland in the sense that, absent extensive human intervention or major natural disaster, our lands tend to produce forest. But, as Figs. 1- 5 indicate, all forests are not alike - they vary due to particularities in factors such as climate, soils, hydrology and history. We've explored two 'special cases' elsewhere: you can visit our other pages for our ideas on Floodplain Forests and Ancient Woodlots. On this page, we'll try to give something of an overview; we are actively working on our forest classification, so you can expect updates. Botanists classify forests not only based upon the tree cover but also the woody and herbaceous understory. Claudia and her colleagures at Hudsonia have been doing extensive forest plant surveys as part of our Living Land Project; and we hope to refine our definitions and descriptions over the next couple of years. 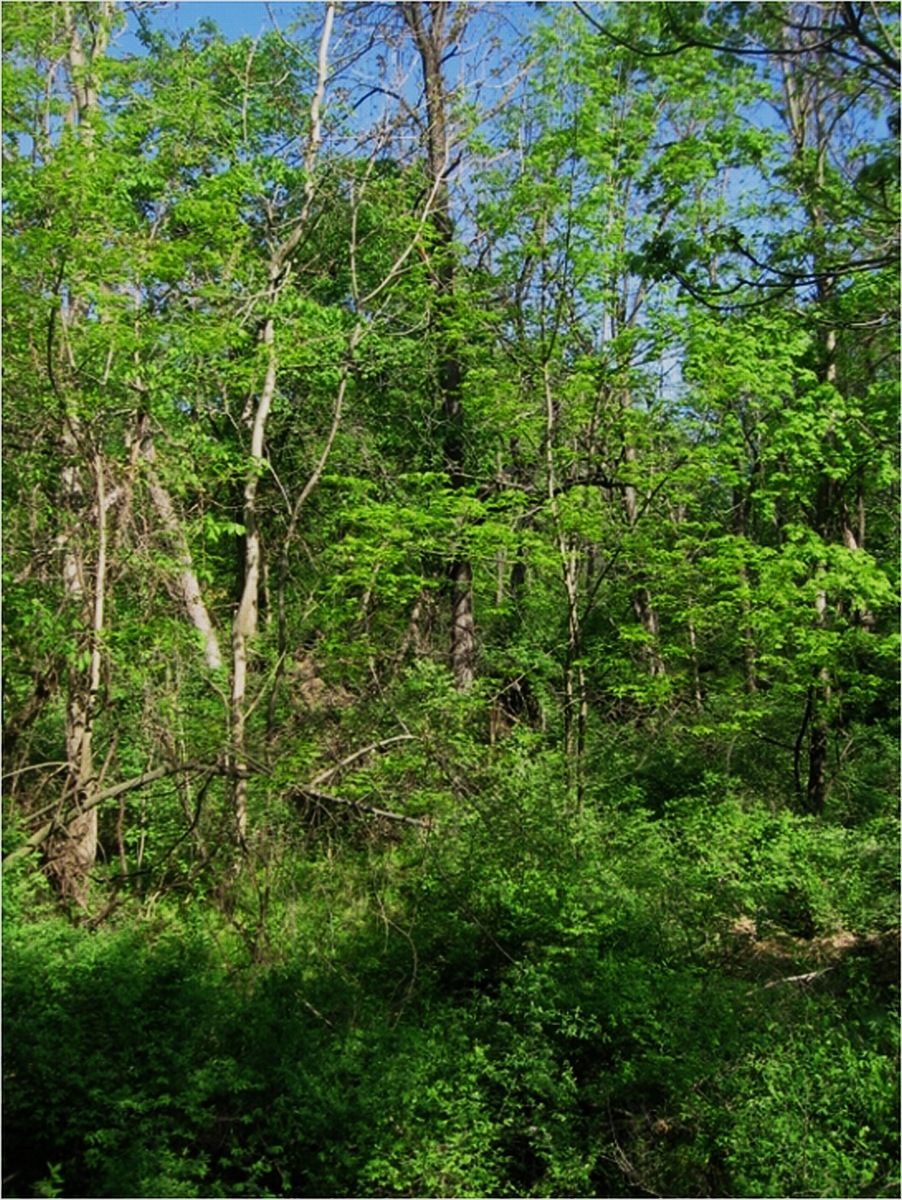 Fig. 3. A Successional Southern Hardwoods Forest at the High Falls Conservation Area. This forest is returning after mixed agriculture and gravel mining in the neighborhood. 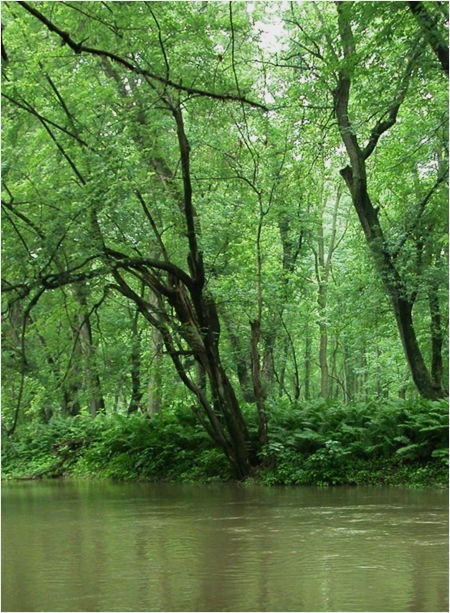 Fig. 5. Floodplain Forest in Ancram. Different 'flavors' of floodplain forest exist - some dominated by Silver Maple, others by Sycamore, others by ashes... and, of course, there are a variety of mixed stands. 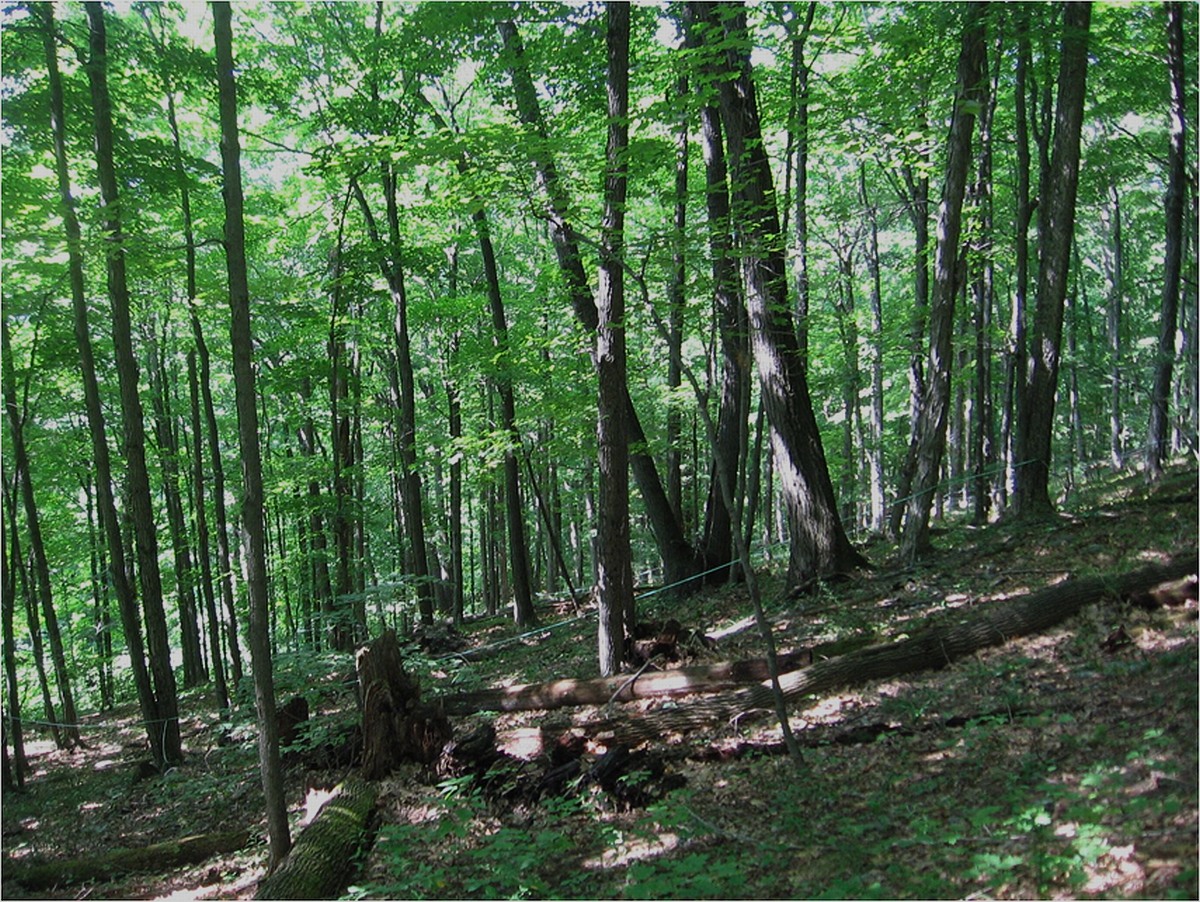 Fig. 6. A Beech-Maple Forest at Earthborn Farm in Hillsdale. These forests tend to occur on richer, moister upland sites.

Forests are a dynamic place in both the short and the long term. On shorter time scales, wind and ice storms, disease and pests, fire and flooding... all can cause rapid changes in forest composition. The fact that disturbance is such a regular part of a forest's life is one reason some ecologists say that no real climax forest exists - the 'slings and arrows' of everyday life don't permit a steady state. Another reason one might question such a steady state is that it assumes all things are equal over a long time period, but they are not. Even before human intervention, climates rarely were unchanging for long periods, the Ice Age being one of the most dramatic examples of this fact. With glaciers only having withdrawn from the area ca. 15,000 years ago, the vegetation may still be rebounding. American Chestnut, for example, only returned to the area about 2,000 years ago; it was subsequently wiped out over a decade or so by the Chestnut Blight (Fig. 7). 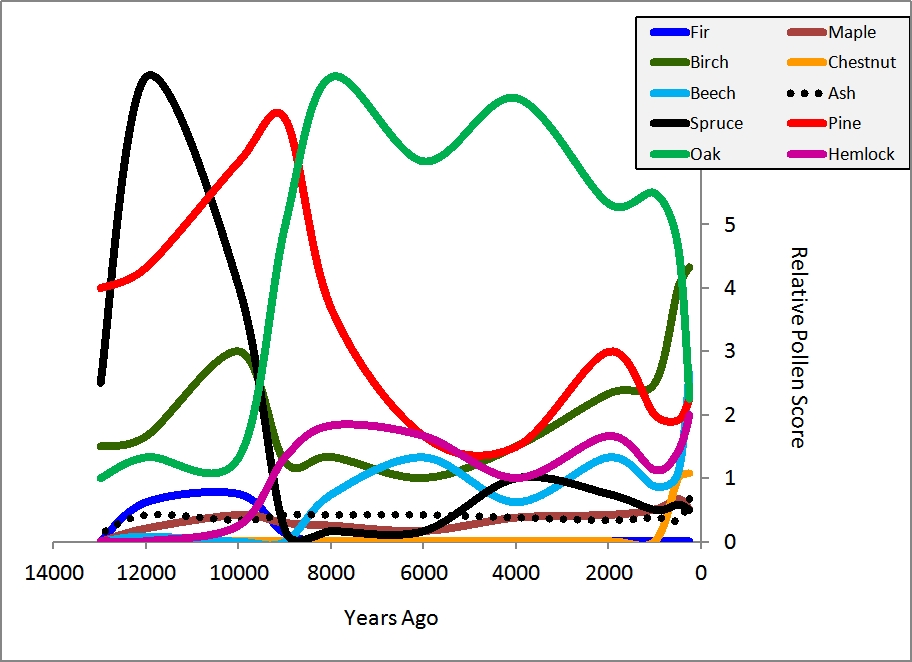 Fig. 7. The relative pollen abundances of various forest trees in sediment cores from waterbodies in our region. Data are from the North American Pollen Database, accessed through http://ceiwin5.cei.psu.edu/Neotoma/Explorer/.

Although American Indians no doubt affected the forest through their field agriculture, tree horticulture, burning and other uses, the arrival of Europeans initiated a period of more profound change. The most evident form of change was simply the removal of forest. For most of the first five centuries, such clearing was primarily for agriculture. Over the period of a century starting in the second half of the 18th century, Columbia County went from being over 80% forested to being around 20% forested. Over the subsequent 100 years, forest rebounded to more than 60% of the County's surface area. Change continues with an apparent incipient 'second clearing' underway as forest is removed, largely for non-agricultural development (Fig. 8). 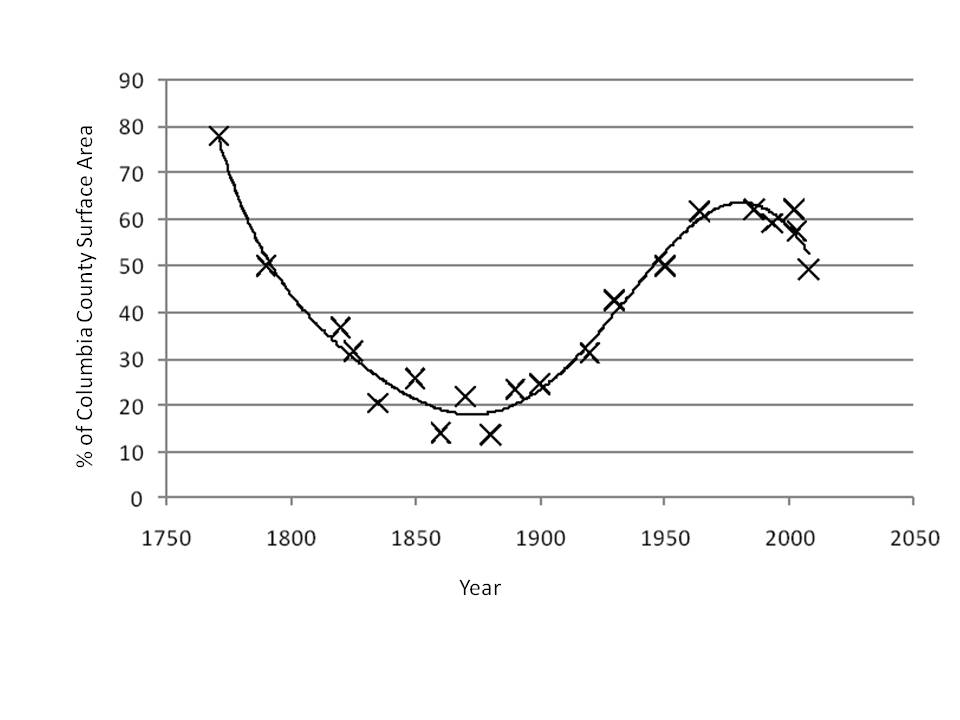 Fig. 8. Forest cover in Columbia County since the late 1700s. Estimates come from a variety of sources; while the values may not be precise, they probably do reflect the general trend in the County's land cover.

However, to further complicate the picture, forest clearing did not have a uniform effect on forest composition: certain trees were more heavily affected than others. This selectivity occurred for at least three reasons. First, farmers prefer certain kinds of land because of factors such as soil and topography. These are factors that also affect which trees grow on the land (indeed, early farmers used forest composition as one way of choosing their field locations). As a result, agricultural clearing preferentially removed certain forest types. White Oak is one example of a tree that may have been most common on good farmland. The second reason for humanity's selective effects was that trees differ in their uses, some, like the assailed White Oak, are great for timber and so are readily cut. Others, such as the hickories, are particularly fine firewood. Yet others, such as Walnuts and Sugar Maple, may have substantial value for the food they can produce while living and, hence, they may tend to be preserved. Lastly, human activity has selectively affected certain trees incidentally. For example, certain kinds of trees are better able to return to clear cuts, others readily fill in gaps where selective logging has occurred. Hence, aside from changes in forest extent, there have been substantial changes in forest composition (Fig. 9). 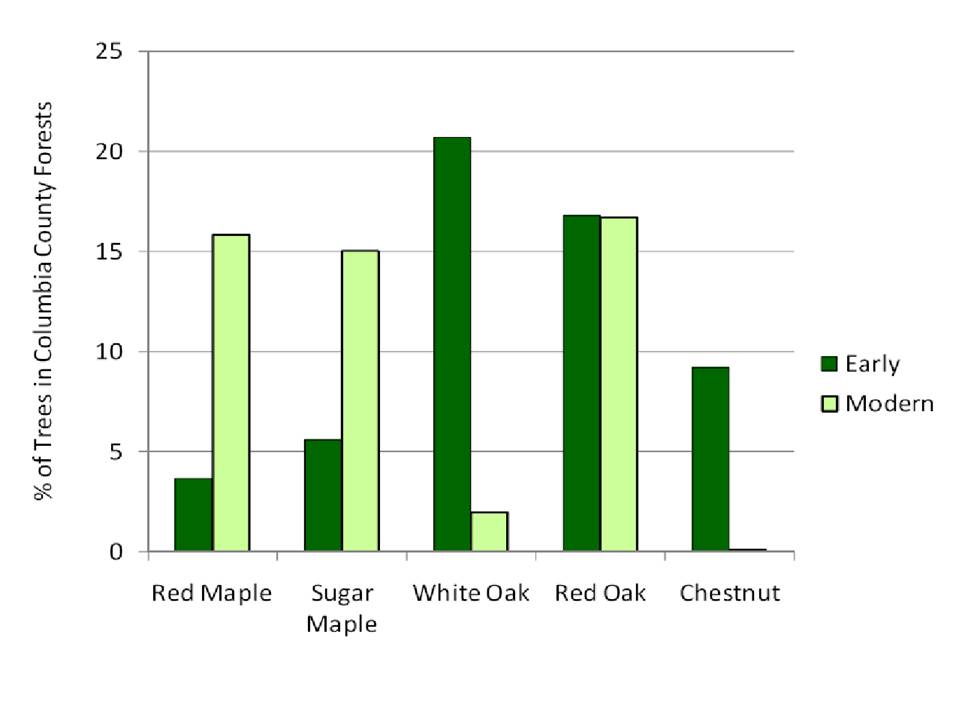 Fig. 9. The historical and modern composition of forests in Columbia County, as derived from early property deeds and modern forest surveys, including our own work and the US Forest Services forest inventories.

Of course, forests aren't just trees or even plants. Many native organisms live in forests. Our current work includes descriptions of ant and ground beetle communities in various habitats across the County, including forests. The graphics below show how similar these communities are to each other. For example, Fig. 10 shows that forest ant communities differ largely from the ant communities of more open habitats and that, within even the forest communities, those of oak-dominated woodlands appear to be distinct. Ground beetles (Fig. 11) show somewhat similar patterns, with relatively large differences between wet and upland forest communities. 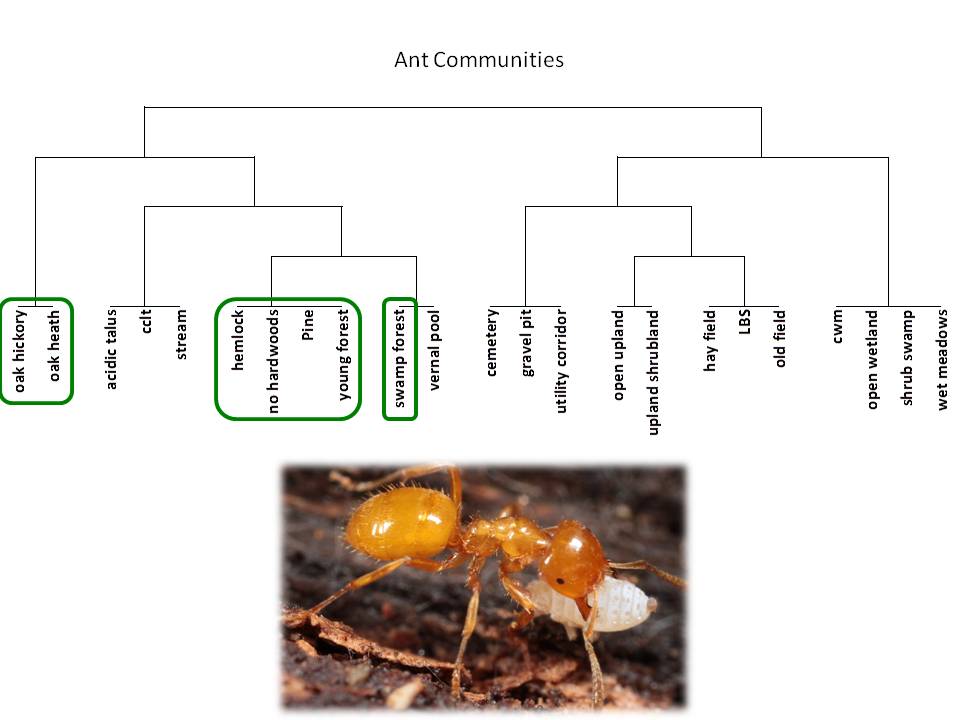 Fig. 10. A dendrogram showing patterns of similarity amongst ant communities. Those communities which are closer to each other in the tree's branching pattern are more similar to one another than more distantly connected communities. 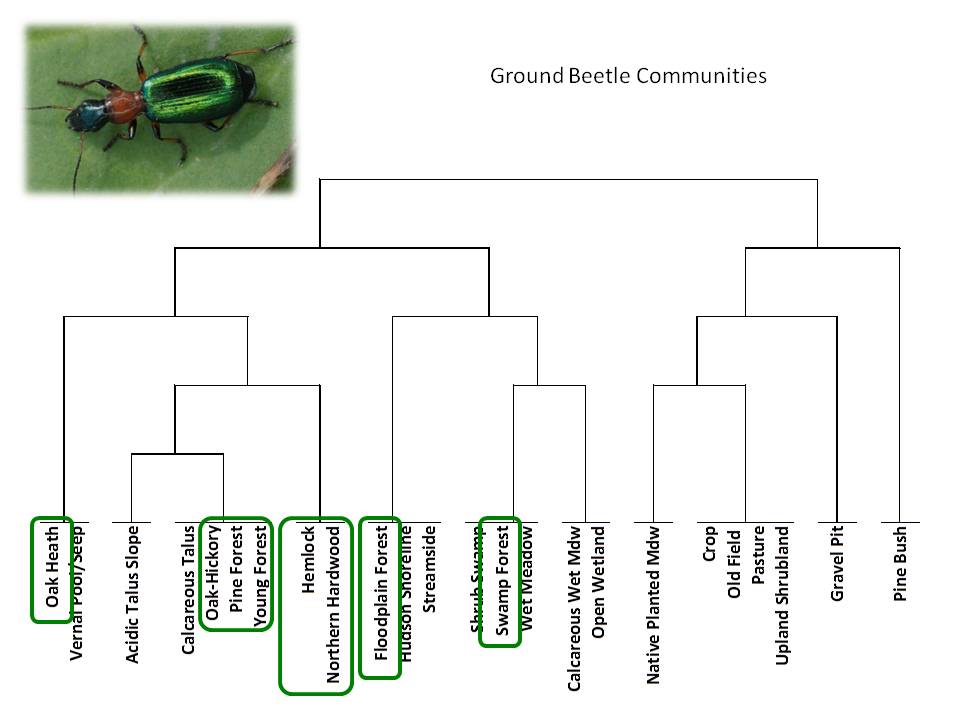 Fig. 11. A dendrogram showing patterns of similarity amongst ground beetle communities. As with the ants, those communities which are closer to each other in the tree's branching pattern are more similar to one another than more distantly connected communities.

However, clearly one of the reasons we love forests is the trees, so we'll end on that note. 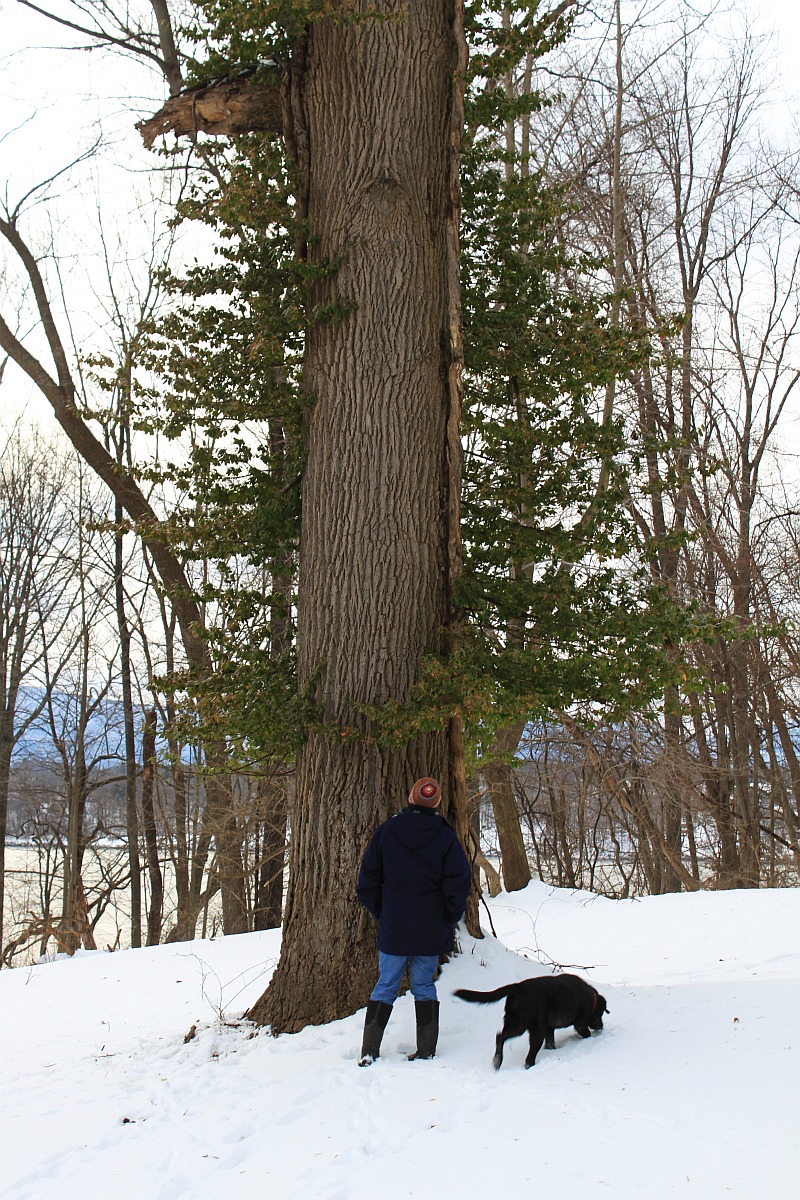