Purple and gold are, as they say, royal colors. The Goldenrods and Asters of the autumn old field played off of each other in a pleasing frieze. Pleasing not only to me, but also, evidently, to the butterflies. I had followed this hillside field behind my house since Spring, chasing its butterflies across the season. Such a place can be tempting to butterflies because, from the spring-time flowering of the Juneberry or Cherries along its edges; through the midsummer Clover, Heal-All, Thistle, and Bee Balm; and up to those fall flowers, it provides nectar for the winged and not particularly choosy adults. At the same time, these fields, brush-hogged but once every other year, tend to be relatively diverse in native plants and such natives can be important food for those oh-so-picky caterpillars. At my September visit, I could thus look back on a series of rewarding outings to the spot and see in its ragged surface the stuff of biological richness. [more about our local butterflies]

“Sad” is how a farmer whom I know might describe that field. ‘Sad’ both for being a neglected field in and of itself, and ‘sad’ for what it says about the fate of agriculture in the County. Such fields often speak of families who have moved on or, at the least, out of farming. To be an old farmer and drive through our county must be to drive through a landscape full of the ghosts of past glory. This same field that was an apple to my eye is a nagging sore to another’s. [more about landscape change]

And then, in addition to those old fields, there are other fields that are neither celebrated nor bemoaned. Follow an abandoned field for another fifty years, and it will likely disappear into the forest that is now the common cover of our county. Most of our forests are overgrown fields whose past is conspicuously limned only be the stone walls wending their ways through the trees. Walking today along a nearby ridge, the rock walls poke through the leaf litter like mountains through a fog. However, they are strung across the land with a logic clear only to a bygone farmer whose handiwork has outlived him. The stands of trees on either side of the wall, with more White Pines to the left and more Oaks to the right, have as much of the field as the forest in them;  their distinctness reflects the legacy of agriculture as much as the natural tendencies of the woods. [more about changes in our forests]

We live in a landscape of multiple perceptions -the ecologist’s rich, old field; the farmer’s sad testament to abandonment; the developer’s  wasteland; and the urban émigrés comforting, rural openland can all be one and the same field. And we live in a landscape of multiple realities – that wooded ridgetop is both field and forest, is both man-made and wild. We, as residents, will find no single truth in this landscape. The best we can hope for are shared views which are sufficiently broad so as to encompass these perceptions and realities.

The goal of our monthly column will be to look at these different aspects of our landscape in ways that broaden our shared understanding without, I hope, being as dry as that stated purpose makes them sound. Each month we’ll offer an exploration of some aspect of the landscape from one of us here at the Farmscape Ecology Program – Claudia, Anna or myself.

Butterflies:
We've been trying to follow butterflies in the County for the past few years. Our observations have been spotty at best, but we have assembled a list of observed and likely species, and last summer we facilitated a small group of butterfly nerds (like us) who started to do some surveying around the County. The results of those outings are posted on our butterfly webpage and include a series of reports on the Canaan 'home field' mentioned in the article. The butterflies in that field (which is pictured below) were not particularly rare or abundant in the larger scheme of things, but it was a bad year for butterflies around the County, and this was one of the few places I could count on for seeing something. 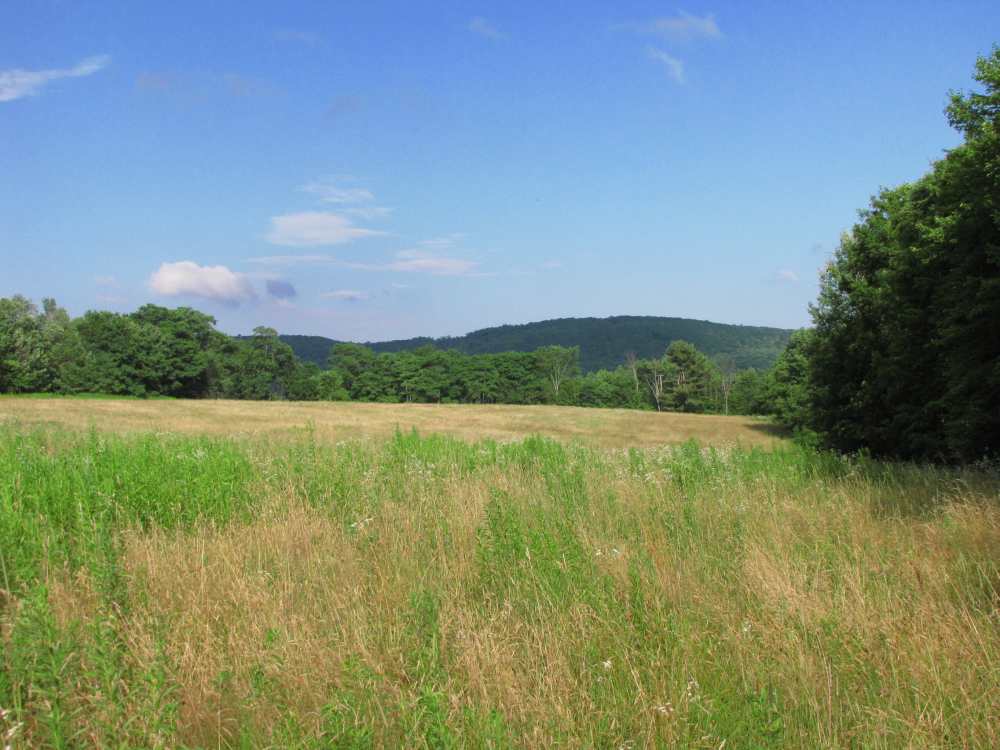 Landscape Change:
The comments of Barry Chase of Chaseholm Farm in Ancramdale are the basis for this paragraph. Barry and his family have been dairy farming for most of their lives. Fewer and fewer of us have been in the County long enough to experience the past century's landscape changes personally. Our Landscape History page is meant to help one understand these changes at least in terms of numbers and maps. A couple of the most telling graphs are perhaps the two below. The first shows how the general cover of Columbia County has changed over the past two centuries - farmland has transitioned to forest via shrubland. The second details those changes in terms of how commercial farming has evolved over the same period as wheat and sheep gave way to hay and rye and then to fruit and dairy. 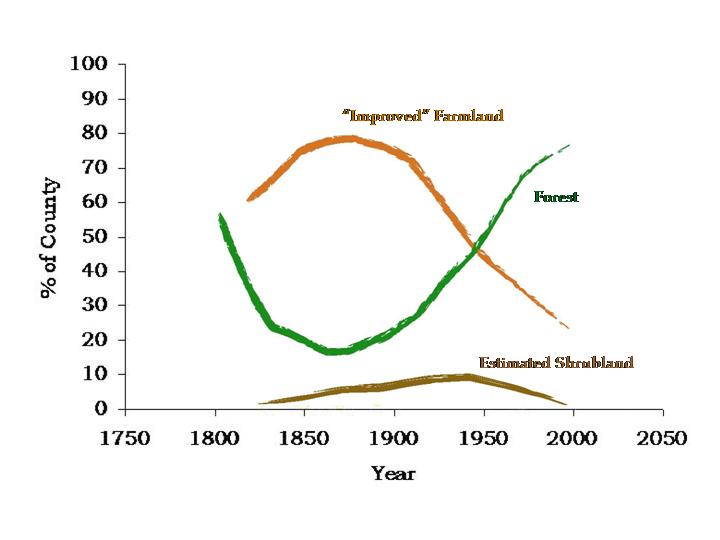 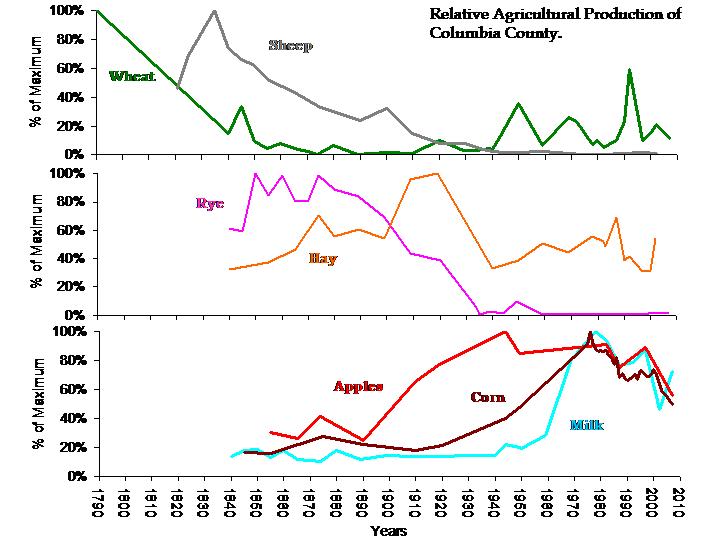 Changes in our Forests:
The first graph above documents how much our forests have changed. The vast majority of our forests are now second growth and have a different tree composition from the pre-settlement forests. One way of looking at those changes is to go back to the early surveying records and tally which trees the early surveyors recorded as boundary markers. The graph below compares those data from the County to some modern data (based on Forest Service fieldwork and our own surveys). Notice that there are some big differences. The relative decrease in White Oak is probably due to a combination of effects including high value as timber, its occurence on prime farmland, and deer browsing; such a decline has been observed throughout much of the Northeast. American Chestnut has been nearly wiped out by the early 20th century introduction of the Chestnut Blight. The relative modern dominance of the maples may have something to do with Sugar Maple's value as a source of maple syurple (one of the few words that rhymes with 'purple') and Red Maple's ability to root sprout after being cut, together with the fact that both species do OK in the openings created by selective logging. 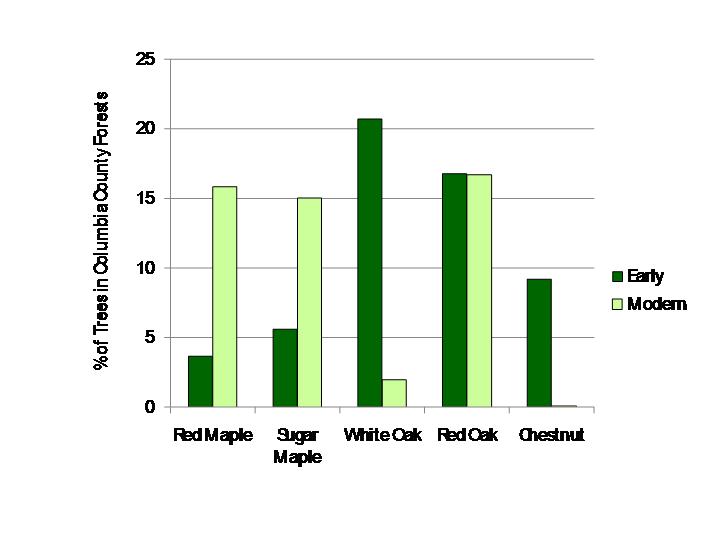 Another way to get a tangible idea of vegetation change is to look at how the composition of the pollen that accumulates at the bottem of lakes and other wetlands changes over time. Pollen paleontologists (which we are not) have been able to identify the preserved pollen grains and associate their depth in the sediment with their age. The result has been data such as what we show in the graph below. This is probably as close as we'll ever get to a movie of the vegetation of our changing landscape. Stockbridge Bowl was the nearest water body we could find which had good information. This is "figure 41" not because you missed 40 other figures on this web page but because it comes from our longer description of landscape change which is available at our 'warts 'n all' page where we post work in progress. 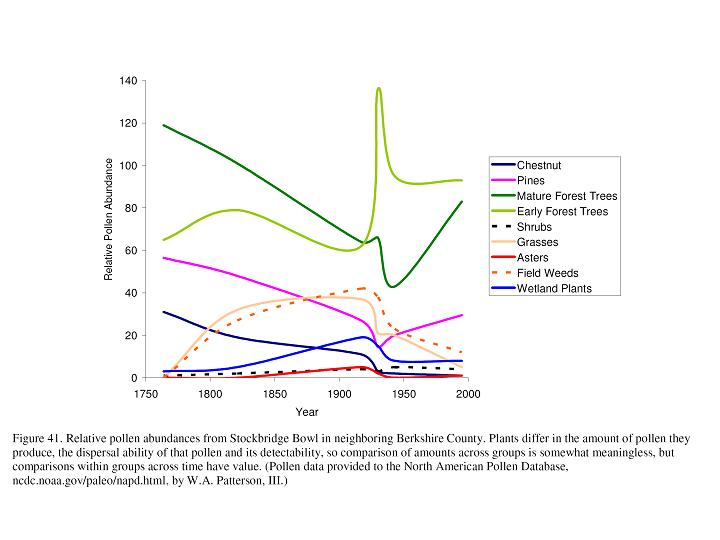