By 'mature', we are referring to hay fields which have not been ploughed and seeded for several years, and hence have developed a relatively thick, somewhat diverse crop of plants. They are distinguished from old fields by the fact that they are cut at least once per year for agriculturally-useful hay. Such hay fields tend to grass-dominated but covered preponderantly by European species. The clearest ecological analogy for such hay fields is for grassland birds, for whom they offer structural analogies to the Prairies and other natural grasslands which were their original nesting grounds (Fig. 1). While such grasslands are unusual in the Northeast, they occurred, at least historically, on areas such as the Hempstead Plains, the Coastal Grasslands, and, to a smaller degree, as small inland patches interspersed in open woodland such as at the Albany Pine Bush. 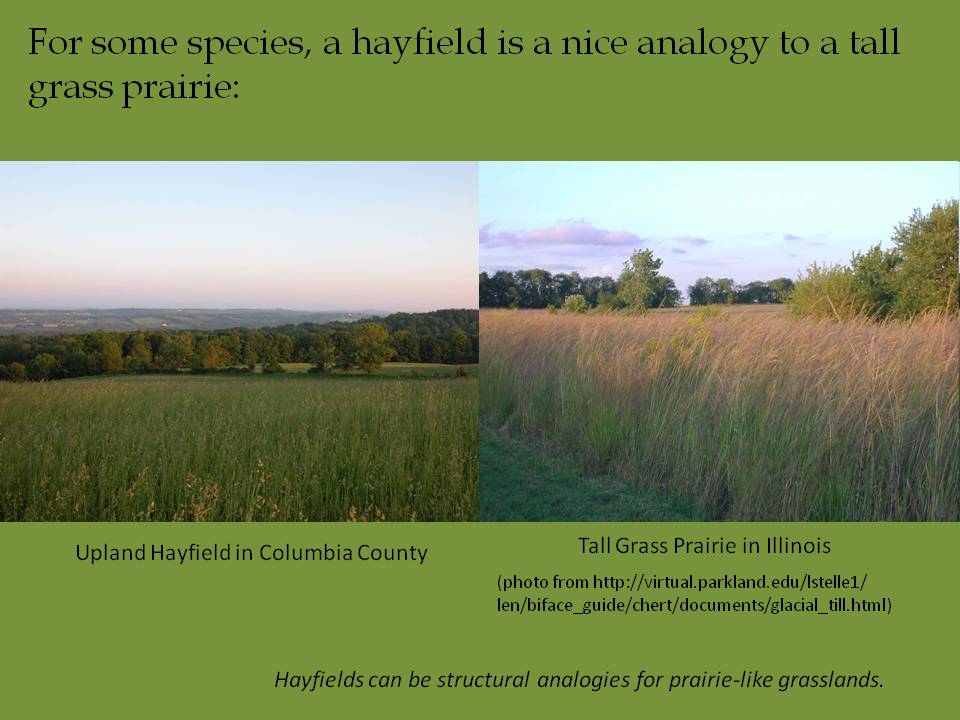 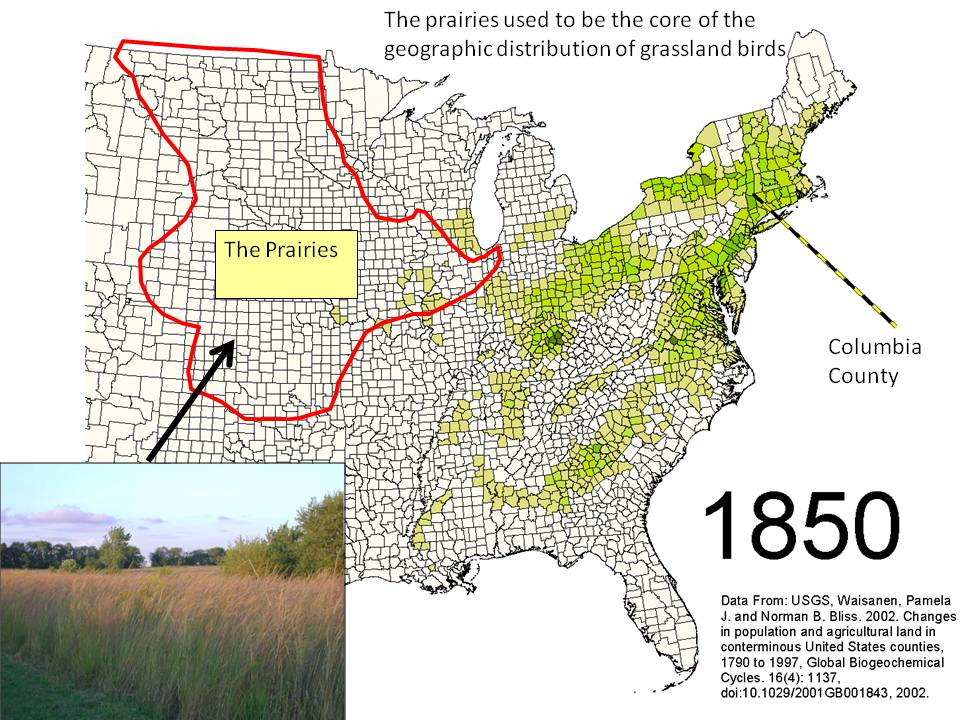 Fig. 2. The extent of intact Prairie and of agriculture (largely grass-based in the Northeast) in 1850. Darker green means more area in 'improved farmland'.

However, this was not to last. As illustrated by the evolution of grasslands in Columbia County over the last 150 years (Fig. 3), major abandonment of agricultural lands began in the late 1800s, thus robbing birds of much of their new-found habitat. 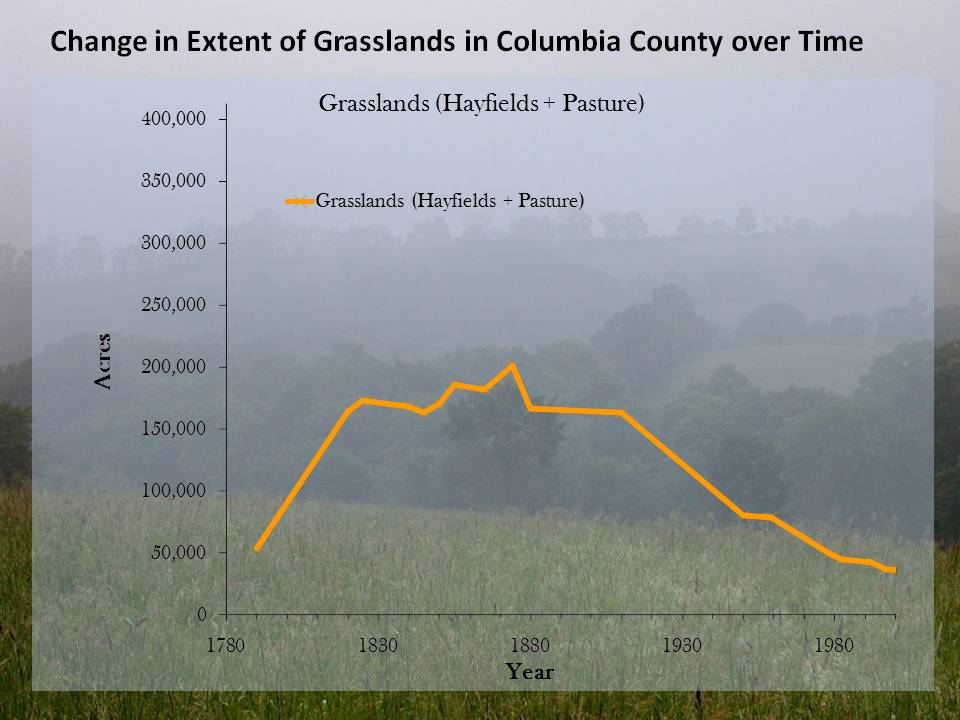 Fig. 3. The estimated trajectory of grassland extent in Columbia County over the last 200 years.

At the same time, agriculture (and not grass-based agriculture) was moving into the Prairies. Thus, by the end of the 20th century (Fig. 4), grassland birds were facing substantial declines in breeding-ground habitat, not to mention habitat challenges in their tropical wintering grounds. 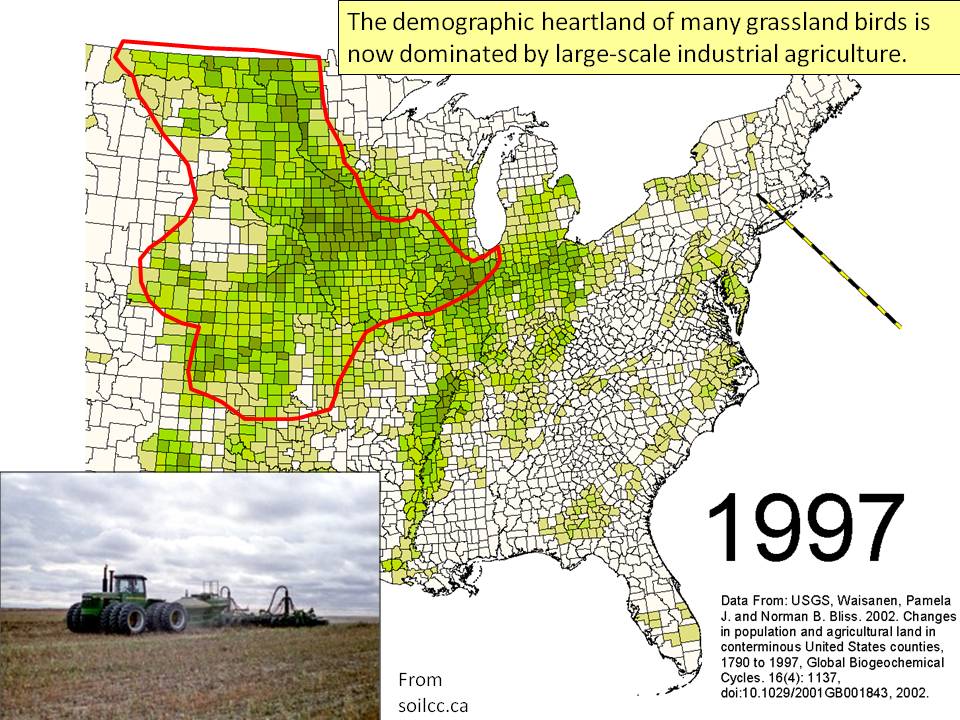 Fig. 4. Farmland in 1997 showing the expansion of often-intensive farming into the Tall Grass Prairies, together with the decline of Northeastern agriculture.

Managing for grassland birds in our mature hay fields in large part involves finding ways of extracting economically useful hay crops, while not destroying nesting sites. A key parameter here is fledging date (Fig. 5), that is, the date at which young birds fly from the nest. If haying occurs during the period between nesting and fledging, then most nests are lost and such hay fields actually become ecological traps, attracting birds but then destroying their reproductive investment. Some birds will re-nest, but only if nest destruction happens early enough in the nesting period. 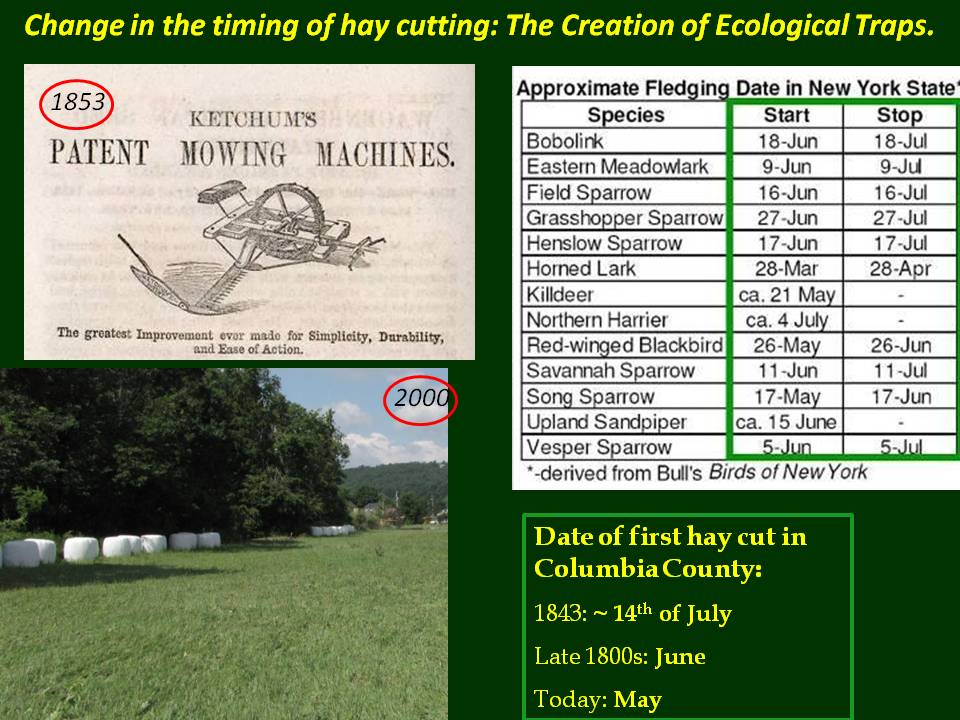 Fig. 5. A table of fledging dates for some of our grassland birds. As suggested by this image, the date of first hay cut has progressively impinged upon the nesting season of many birds.

It is important to point out that the Prairie analogy for mature hay fields does not hold for all organisms. Most obviously, few native plants (Fig. 7) are present in most of our hay fields. This, in turn, means that they do not serve as good habitat for many of our specialized herbivores, such as the caterpillars of moths and butterflies. Such caterpillars often have intricate, physiologically-based co-adaptations with their food plants and so many cannot make use of the European flora (some species, however, are slowly adapting). Thus, although grassland birds have declined substantially after their 19th century bonanza, they have probably not declined as extensively as many grassland butterflies, a case in point being the Regal Fritillary (Fig. 6) which was once widespread in the Northeast. 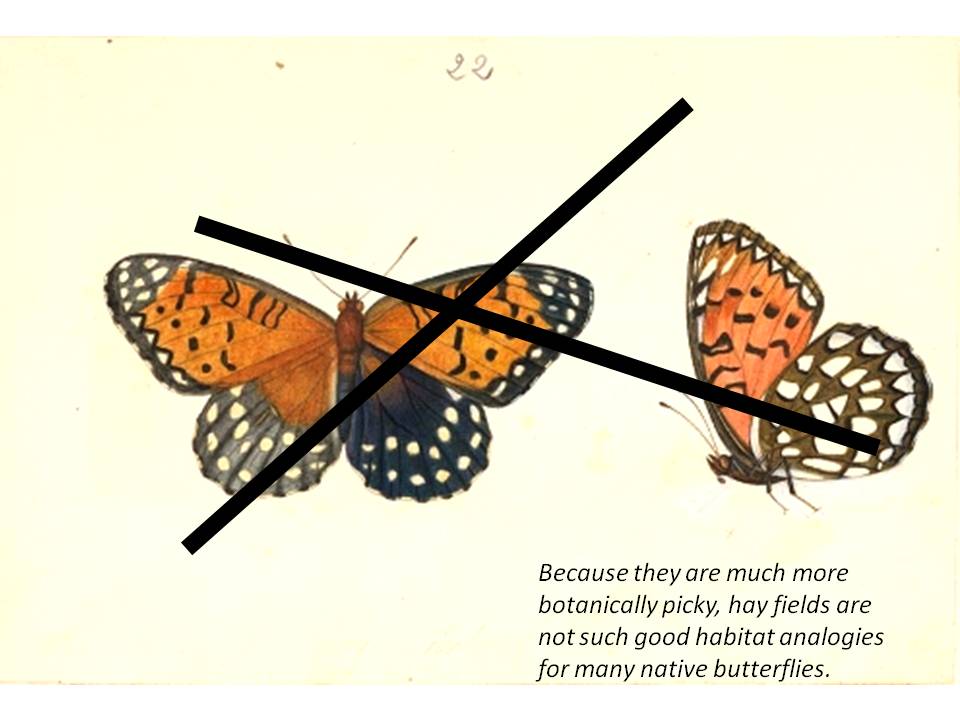 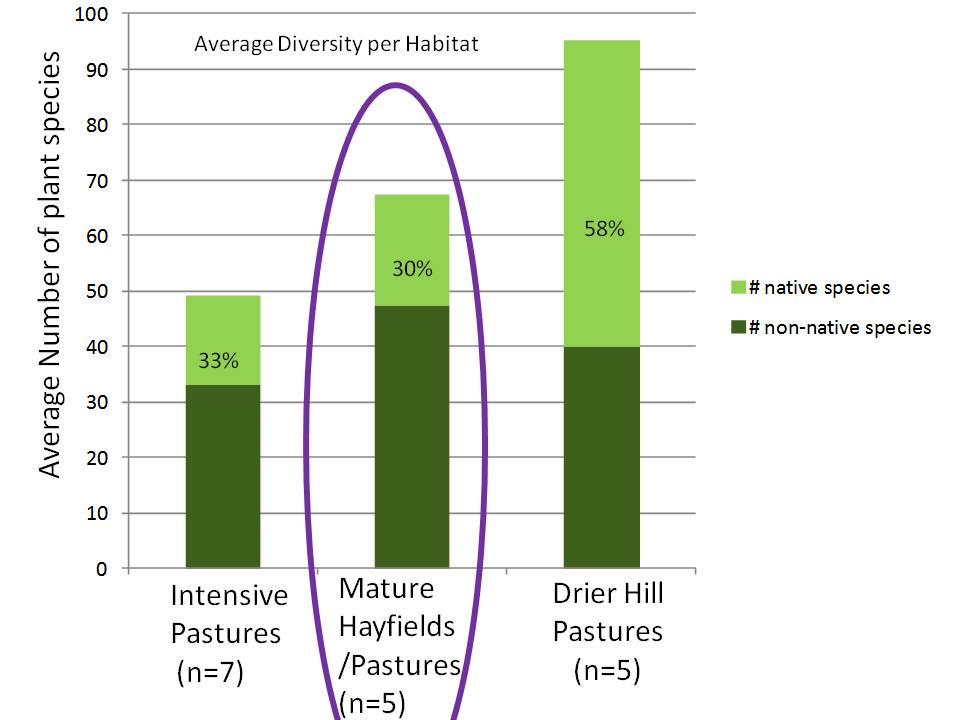 In sum, it currently seems that grassland birds are the most important focal organisms when managing for native species in mature hay fields. When hoping to at least maintain existing populations, the first step is to monitor for grassland birds and create a map of their hotspots on a given property (e.g., see Fig. 8 for Hawthorne Valley Farm). Once prime fields have been identified, management for at least those fields should be planned so as to avoid a hay cut during the nesting period. As a rule of thumb, at least for the Bobolinks in our meadows, we suggest cutting shouldn't happen until after the first week of July. If an early cut needs to happen, then work out of the University of Vermont suggests that it should be completed in May at the latest, with at least 65 days permitted before mowing the same field again. 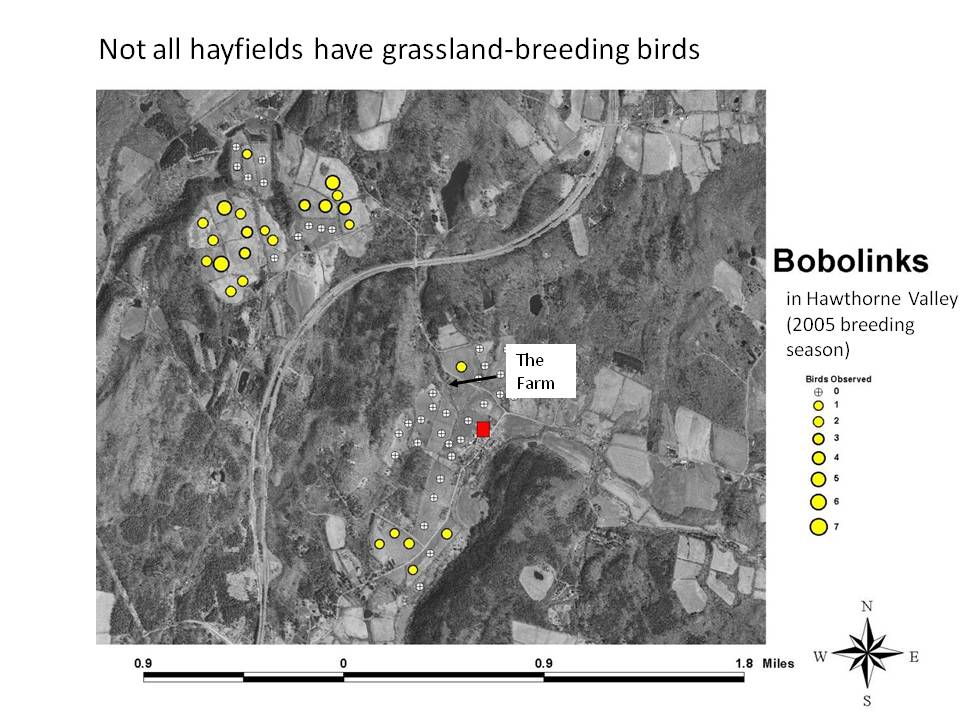 Fig. 8. The abundance of Bobolinks on fields in and around Hawthorne Valley Farm. Maps such as this can serve to identify those fields where a delayed cut will be most beneficial to birds.