Research on the Distribution of Vegetable Garden Invertebrates 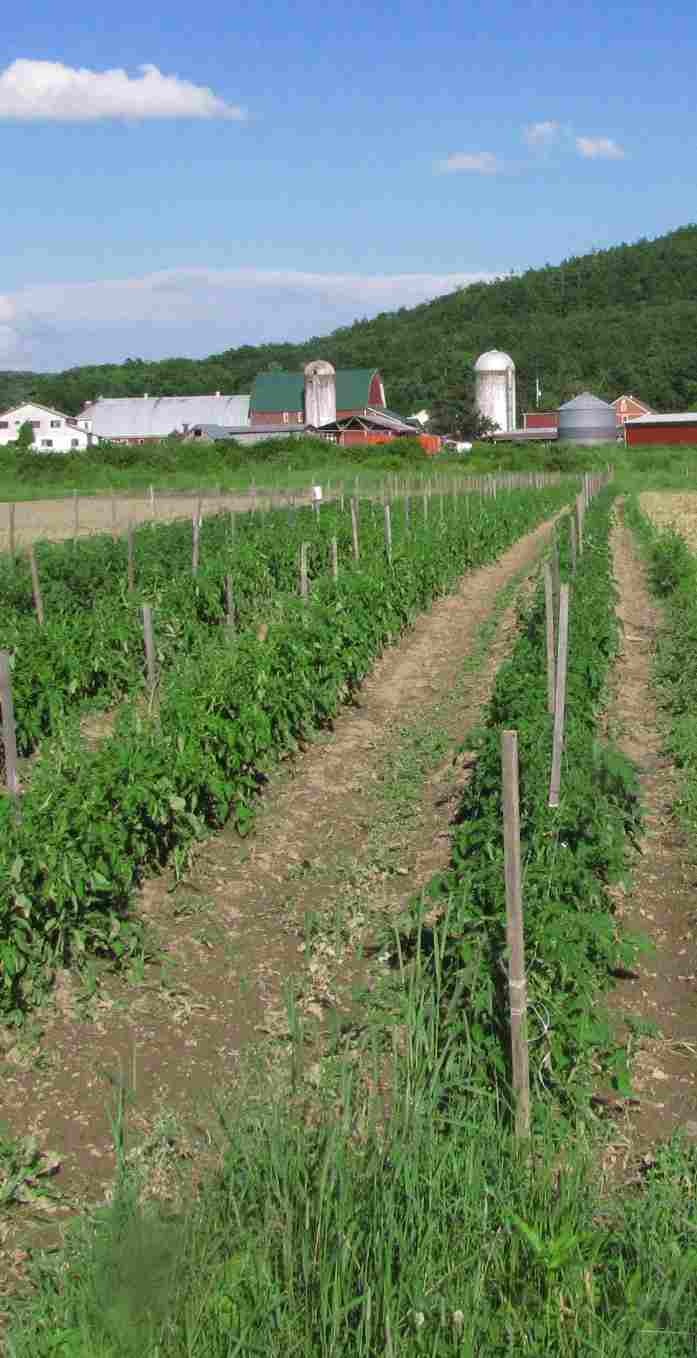 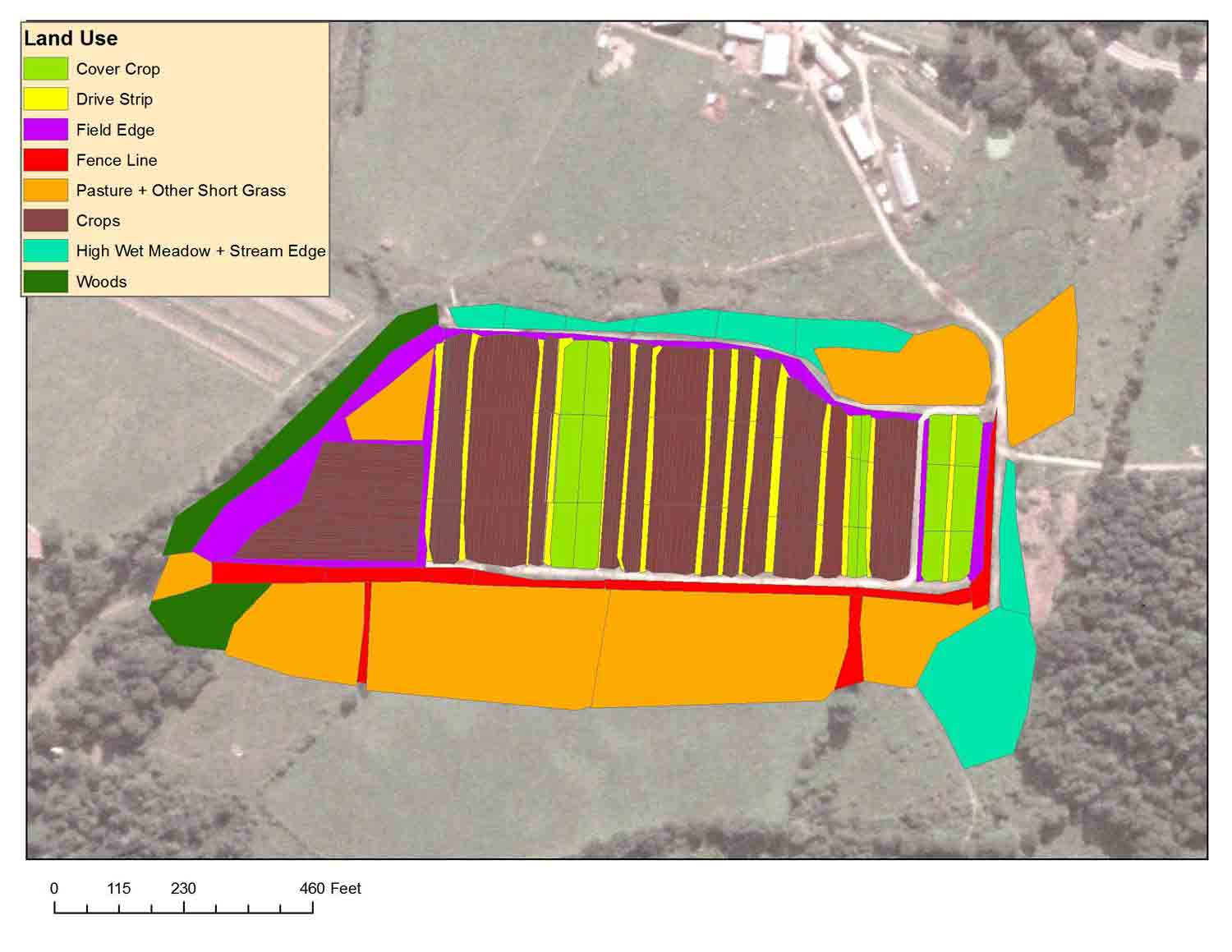 Tell Us What You See!

Do you see any patterns in the occurrence of the pests and beneficials whose distributions are shown in the maps below?

What might these maps suggest about the costs and benefits of having 'wild' habitat around your gardens? 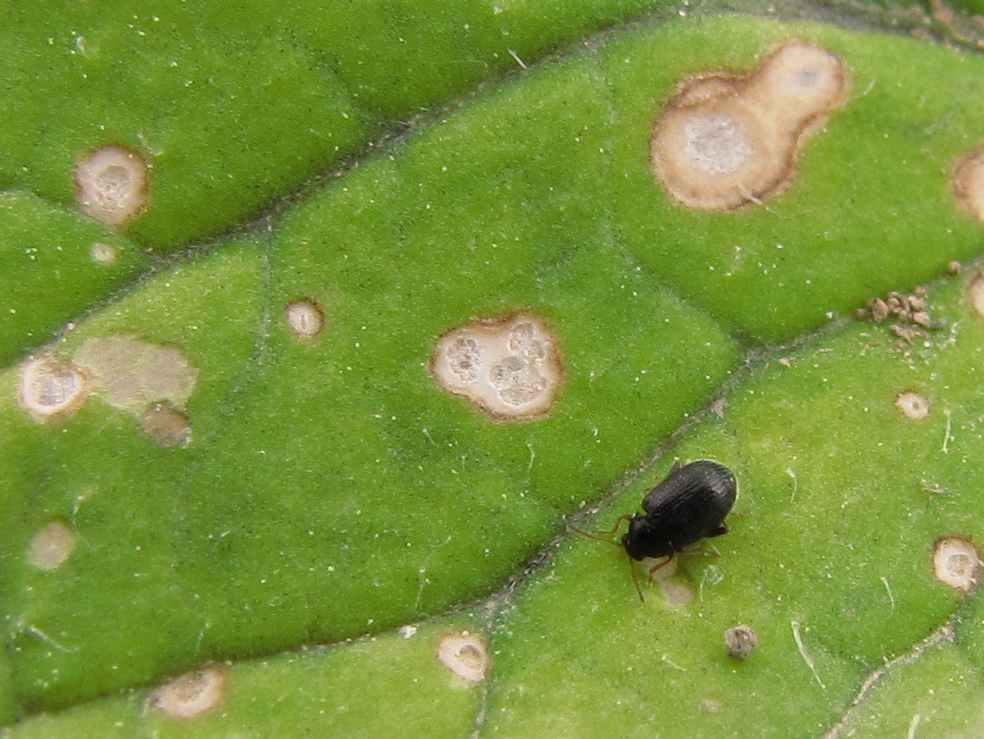 Much of our program work has focused on the question, 'what do farms provide in terms of habitat for native species?'. Less of our work has looked at what native, or at least wild, species provide to farms. Martin Holdrege's work on native bees is one example of this approach. During the summer of 2009, we mapped the occurrence of various insects (strictly speaking, spiders, slugs and the like are not true insects but we won't worry about that detail here) in and around Hawthorne Valley Farm's main gardens. Part of the goal of this work was simply to familiarize ourselves with the creatures and techniques for their study. However, we also wanted to begin understanding the distribution of these organisms across the growing season and around the garden. Eventually, our hope is to use such understanding to look at how on-farm habitat management can assist not only the conservation of native species but also on-farm 'ecological services' (in other words, the benefits insects provide through pest predation and pollination).

Our study area was the crop beds, drive strips, margins, fence rows, fields and forests in and directly surrounding the Hawthorne Valley Farm main gardens. We collected a lot of data and have not finished analyzing them yet, however here are some garden maps that can help one begin to visualize what is happening.

Pit Traps: Pit traps are small cups sunk into the ground and left in place for about 24 hrs. These collect ground-moving organisms such as spiders and beetles. Because we kept the samples collected in the pit traps, we will be able to identify the ground beetles we catch down to species. We have, as the maps will show, already tallied the most common species (Harpalus rufipes) which is a European import. We set 10 pits per day, with five pits in each of two different location on each day. We tallied the contents of 739 pits. Because of the effort involved in setting and sorting pit samples, we only set pits at a scattering of locations in and around the gardens. We did try to repeat these locations at different times during the year. Results are expressed as individuals per pit per night.

Sweep Netting: To catch flying insects or ones that might be perched on the vegetation, we used a sweep net to survey non-crop portions of the study area (we avoid sweep netting in the crops because thrashing the crops with a net was ... economically unwise.) In each bed or study section, we typically made three sets of 25 sweeps (a sweep is simply a single whisk of the net). We sorted the live bugs in the field, tallying totals for general groups and releasing our catch. Results are expressed as the average number of individuals captured per sweep. We conducted roughly 700 sets of sweeps during the summer, tallying about 9,000 insects. Towards the end of the summer, we began using a bug vacuum to sample the insects. This let us sample from both crop and non-crop habitats. We covered the intake of a leaf vacuum with muslin and then tallied insects trapped by the netting during standardized sampling. These data are included with our sweep netting sample.

Crop Inspections: In order to understand both the damage being caused by pests and the occurrence of insects on crop plants (which, because we didn't sweep them, were otherwise unsampled until we got the vacuum cleaner in late summer), we did crop inspections. This mean inspecting five crop plants per bed and noting the occurrence of insects and damage. The sampled plants were chosen so as to be spread out across the bed, but, being chosen by pacing off distances, we tried to avoid any other selection criteria (such as degree of damage or size). We inspected a total of 445 plants during the summer. Results are expressed as average percent of leaves damaged per plant or average number of insects per leaf per plant.

This work would not have been possible without the able assistance of our interns and other helpers: Becca Kranz, Margaret Ball, Meryl Corsun. Otis Denner, Gianni Lovato, and Martin Holdrege. Thanks to them - sorry this has been so long in coming and that there is still so much left to analyze. 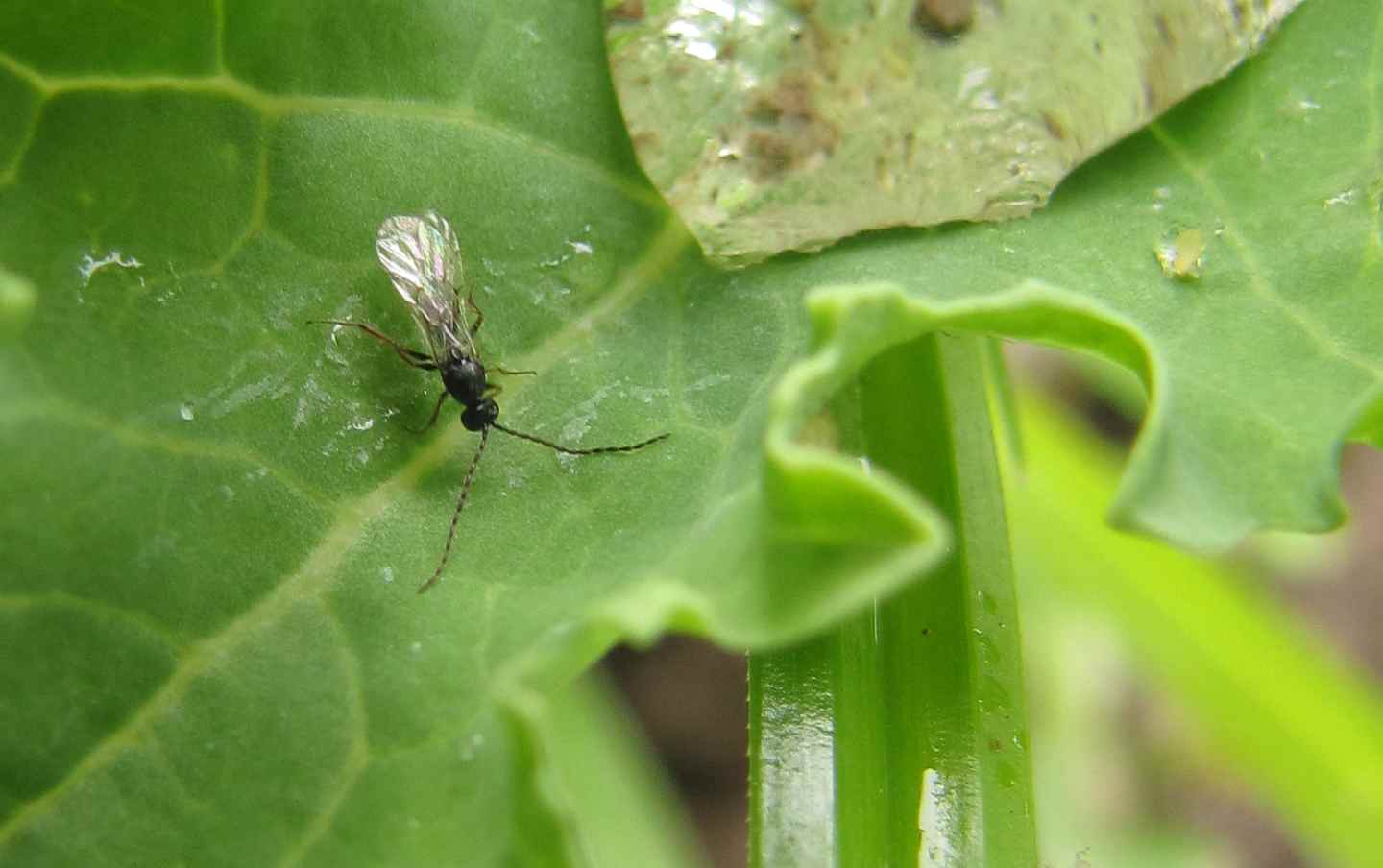 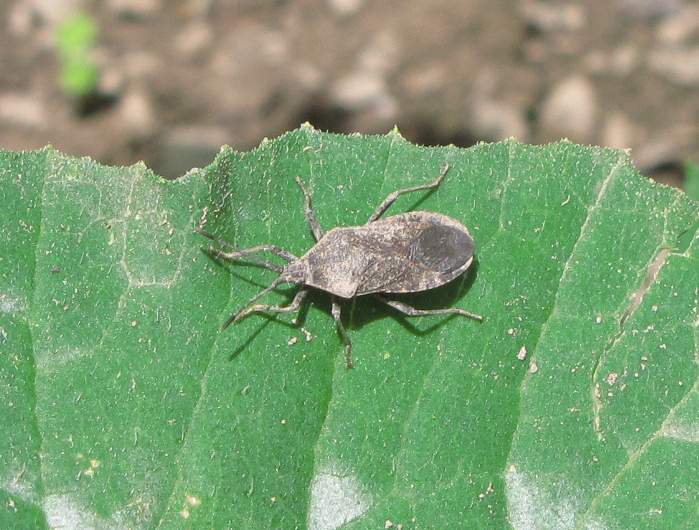 While we have the data, we have not yet done statistical comparisons to identify patterns. Instead, we have made a series of maps and used them to search for possible patterns by eye. This is a very 'unprofessional' way of doing things, but just looking at the data is good to do before the serious number crunching. For more on our spider results, readfalse summarizing her summer work.

These are Garden Maps showing the occurrence of various creatures or of various types of damage. Click on the green title to view the respective maps, all of them are in pdf formatting and should be opened with Adobe Reader. Below, we have included histograms summarizing occurrence for a trio of these groups of organisms.


Pit Traps (when you open these pdf's, look for and click on the 'layers symbol' to reveal the different layers present in the file and then click on the 'eye symbol' to turn the various layers on and off; for more instructions on using these maps, click here. 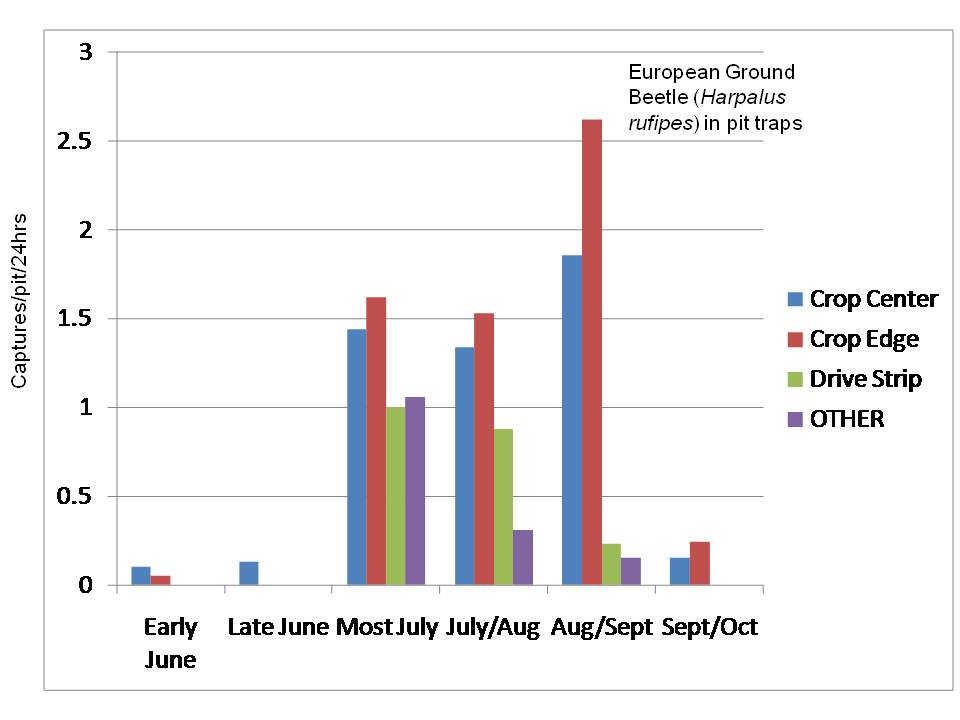 Other Ground Beetles (more likely to also occur in drive strips and taller grass habitats [which are included below in "OTHER"], especially early in the season) 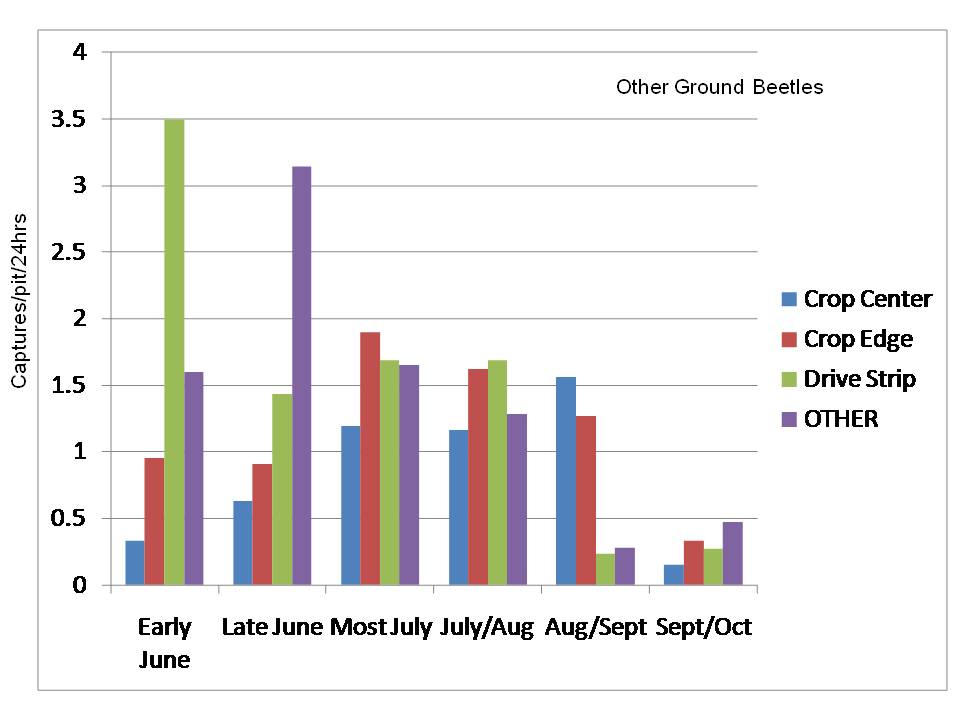 Spiders some of the highest densities appear to be in drive strips, cover crop and peripheral areas; the tendency for high densities in the peripheral areas is re-enforced by the sweep sampling spider map later on this page; that these disperse in from the edge is suggested by their initial occurrence at the edge of crop beds) 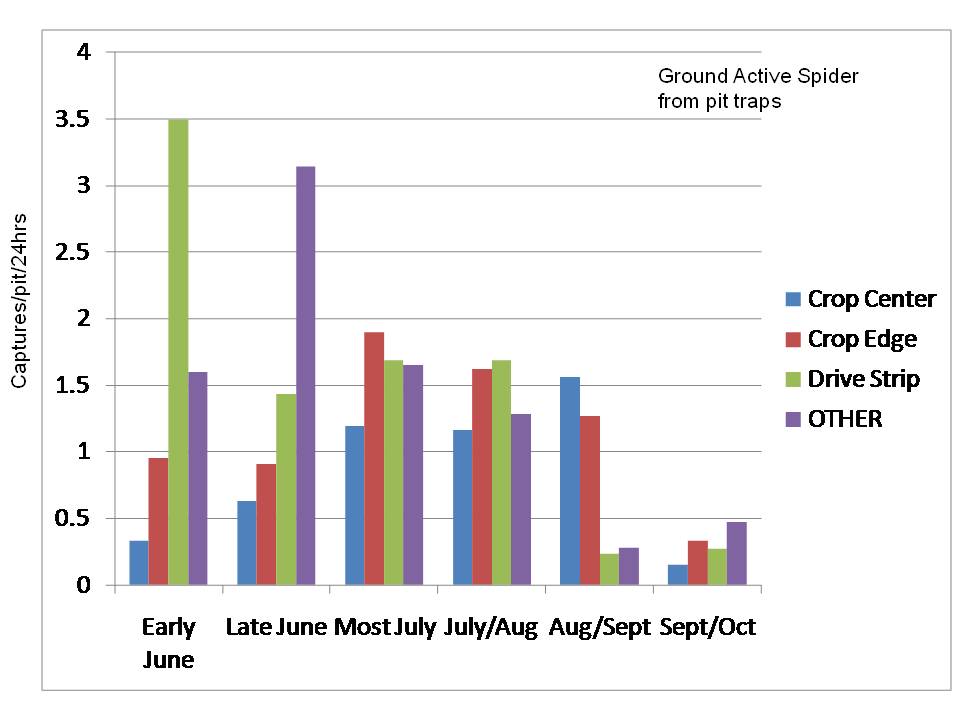 Ants (in the crop plots, there seems to be a tendency for ants to be most common away from the center of the plots; crop inspection samples might have somewhat similar pattern)
Wasps (while some wasps are easily identified as such, others look more like strangely shaped ants and, indeed, some don't have wings; this group contains a variety of more or less distinct wasps; perhaps because of this variability, the patterns aren't strong; there does seem to be something of a donut hole, that is centers of plots may be less dense than edges)
Sweep Samples (these pdfs do not have layers, rather you should just scroll through the pages to see how the distribution changed across the year; the first three dated data maps in each set are actually the combined data from three different sampling periods within each stated range; the last map shows the data from a single sampling; I don't show any units on these maps because I've superimposed maps in a way that lets you see seasonal patterns but makes exact color correspondence to units hard to specify; just remember, darker = denser).

Aphids (something of a tendency for sites in the gardens themselves to be higher than peripheral areas?)
Flea Beetles (they're everywhere, they're everywhere! especially in spring and late summer)
Lady Beetles (hard to claim that there's a clear pattern)
Leaf Hoppers (perhaps building up across the season and most common in peripheral areas)
Plant Bugs (catch all for a variety of plant bugs; that may be why patterns aren't clear)
Spiders (may start in peripheral areas, with central areas only building populations later in the year)
Striped Cucumber Beetles (most common around the edges of the main garden?)
Wasps (at least during some times of year, the peripheral areas might be densest)
Weevils (densities highest in mid-summer at mid-garden?)

Crop Inspections (when you open these pdf's, look for and click on the 'layers symbol' to reveal the different layers present in the file and then click on the 'eye symbol' to turn the various layers on and off; for more instructions on using these maps, click here)

Flea Beetle Damage (smattering of damage early in the summer, especially on the left [northern] end of the garden)
Other Invertebrate Damage (yep, it happened, will need to pair this up with crop data)
Large Animal Damage (that is, Deer, Groundhog or Rabbit consumption; not surprisingly, plot edges might experience the worst damage)
Flea Beetle Occurence (hard to say that there are strong patterns, looks like edges might have more flea beetles than centers, at least later in the season)
Lady Beetle Occurence (again plot edges look like they might be most frequented)
Aphid Occurrence (most common early in the summer, on plots near the garden center - obviously, we need to go back to the crop records and determine what was planted there at that time - it may well be a host plant effect rather than anything spatial)
Ant Occurence (no more rank speculation, let's wait to see what the numbers tell us!... in other words, it's getting late, and I'll be darned if I see a pattern, what about you?)
Spider Occurence (low but >0 densities most common at plot edges; higher densities, then they occur, most common in the center; is that a pattern or just happenstance?)


I hope that you had a little bit of fun exploring these patterns of insects in and around our gardens. Numeric analysis is still to come, but if you have any hunches regarding patterns, let us know. 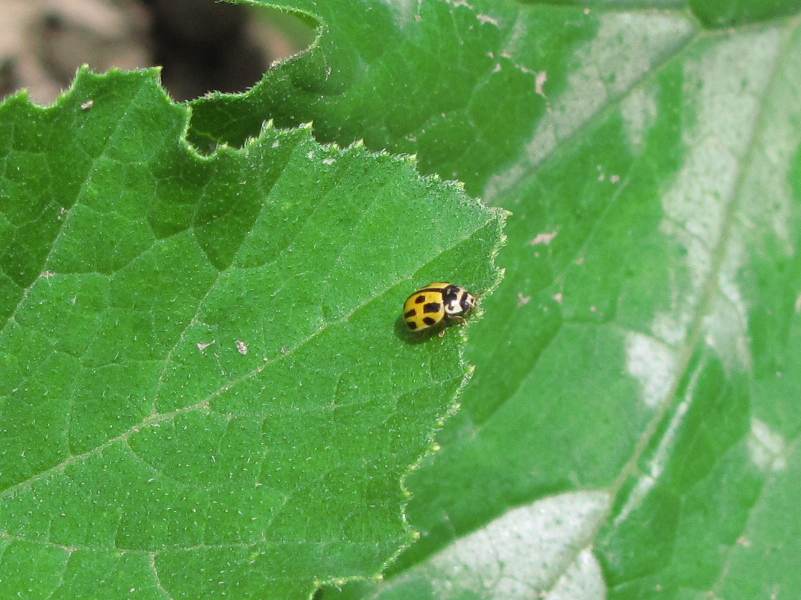 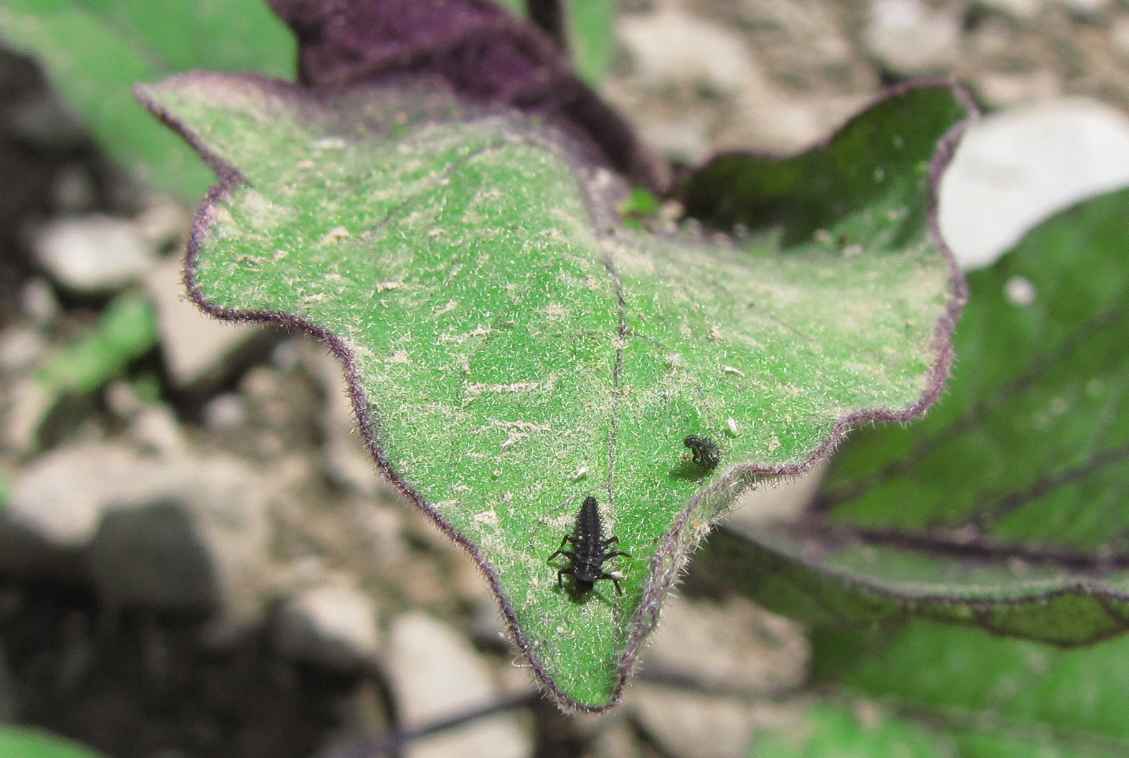