The Progress of the Seasons

The Progress of the Seasons is an exciting opportunity to delve into an historic treasure trove of seasonal observations from a network of “academies” (secondary schools) throughout New York State in the 19th century and explore what they might teach us about today.  We invite you to read below to find out more about this project to explore the human and natural history of New York State in the 19th century and help consider the evidence for a changing landscape and climate.  Meanwhile, here are some quick links for further exploration:

Back in 1825, the Regents of New York State who, amongst other things, were responsible for supervising a network of 'academies' throughout the State, decided they were interested in meteorology and other seasonal and celestial events. In the 1790s, Simeon De Witt (who introduced the 1825 motion) spoke on the need for a meteorological network, stating, “a single reflection will convince one of its utility; for, as the state of vegetation is very different in different climates at the same time, without knowing what allowances are to be made on this account, the farmer, in one climate, will not be able to apply in his practice the experiments on husbandry made in another”.

Although we're still exploring all of their motivations, it's clear that part of their goal was linked to agriculture and the hope of understanding the geographical and annual variation in the growing season. Celestial events, such as aurora, sun dogs, moon halos, meteors and the like were probably explored as possible predictors of seasonal and geographical variation in the weather. "The Progress of the Seasons", or what we today call phenology, was also studied, perhaps in the search for cues that could foretell how a given growing season would unfold. For example, could the arrival date of Robins help one understand when best to plant one's Spring crops?

Academies were equipped with thermometers (initially these were Kendall thermometers, made in New Lebanon, NY), rain gauges and instructions for data collection. 'Academies' were apparently institutions meant to provide education beyond what was available in the basic public schools, which only went through the 8th grade. Such education was meant to prepare students for a semi-professional career or for university. Each year from about 1826 to 1863, academies reported their observations back to the regents who duly summarized them in their Annual Report of the Regents of the University (e.g., see these on-line volumes collected by the Hathi Trust). At least twice, once in 1855 and again in 1872, the State produced volumes summarizing these data and, in 1843, some of the early data were included in a book on New York agriculture. Some of the data also appeared in a Smithsonian publication which included 1850s data from around the Country.

Participants. As shown in the table below, at various points, more than 90 locations participated in the data collections. Very few provided data consistently across all the years, but several sent regular reports. The two maps show some of these locations. The first is a copy of the original map supplied with the 1855 summary publication, while the second is a modern map we've created showing most of the institutes regularly supplying data during the entire project. While there are gaps, much of the State was covered. The Smithsonian data includes some non-Academy observers, and we have added some additional early records (including some from Kingston, NY during 1816, the 'year without a summer'). 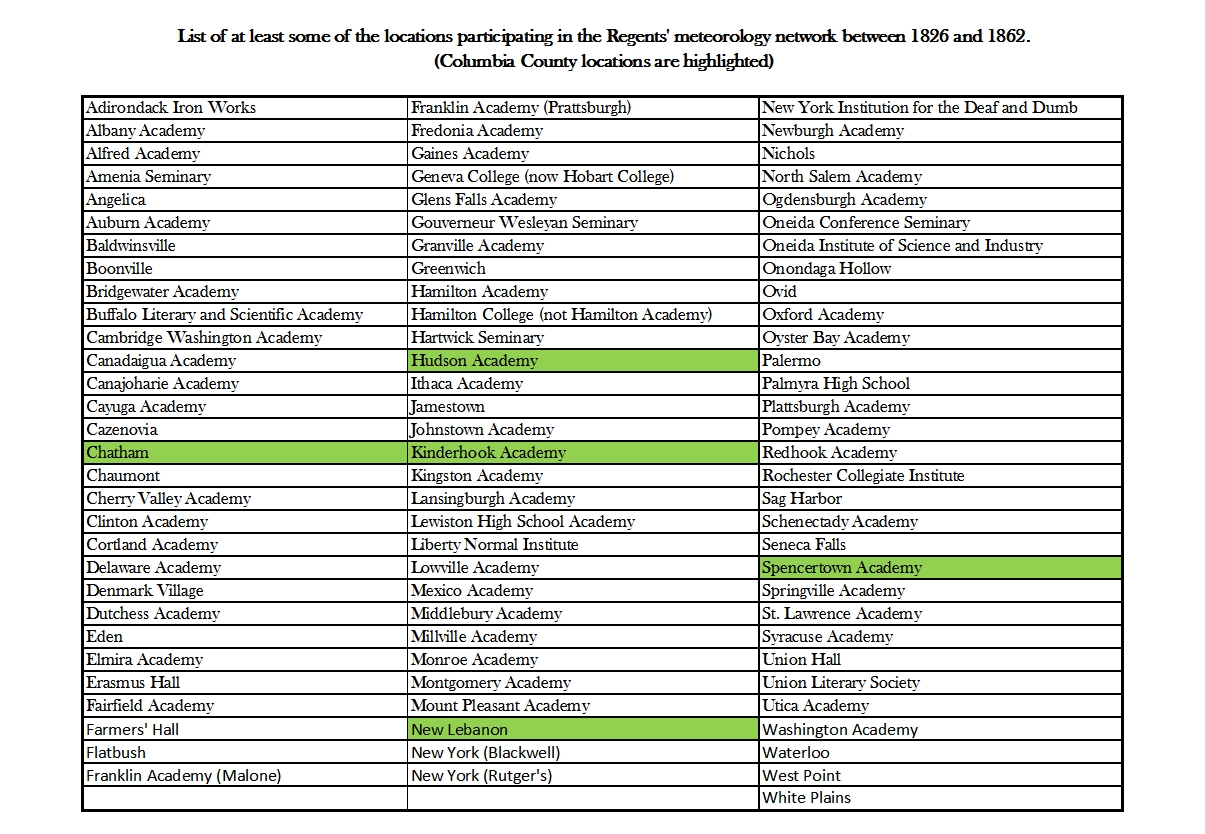 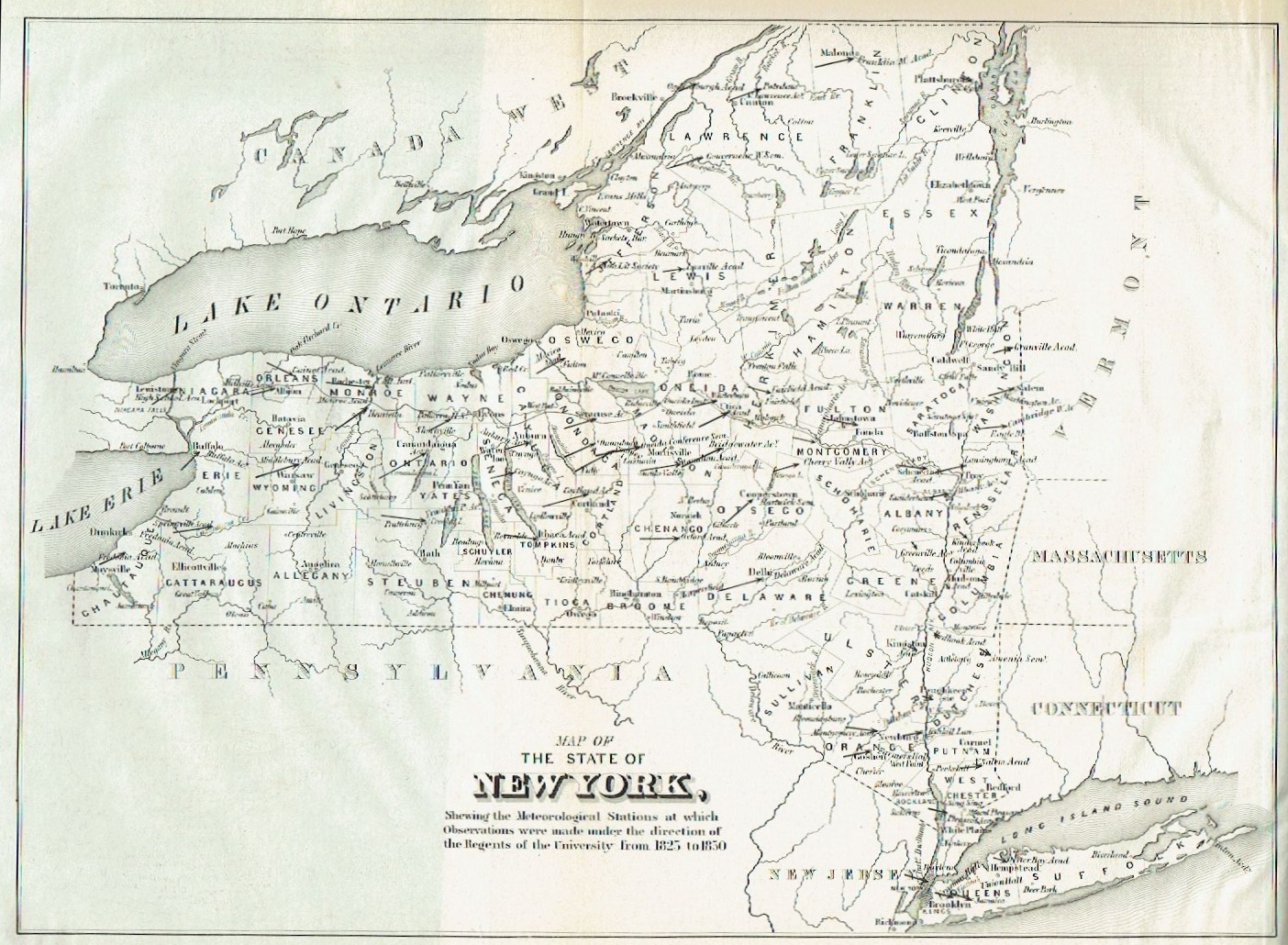 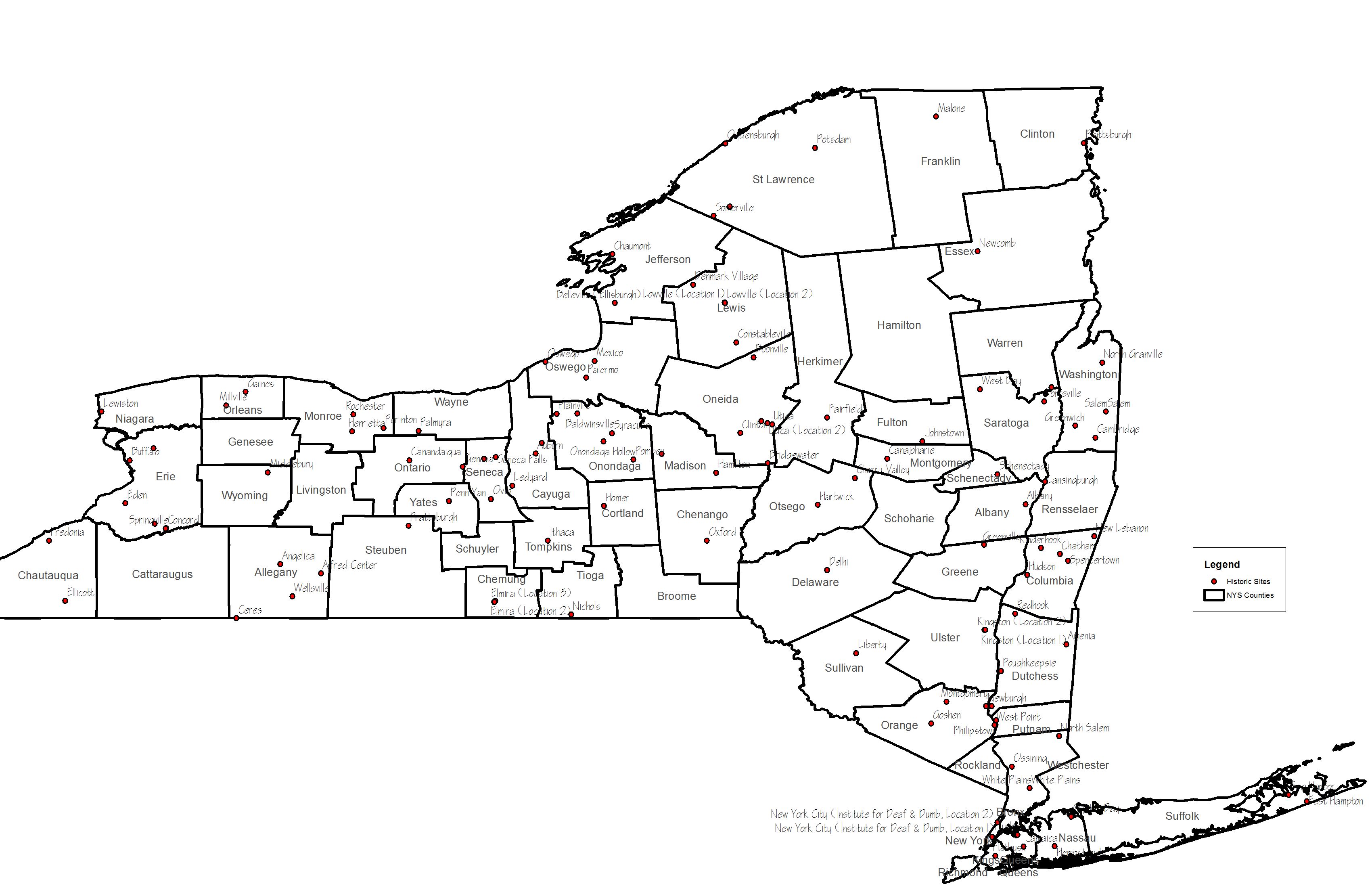 Our map of the institutions contributing during the duration of the network.

Results. We have finished tabulating all of the "progress of the seasons" data in the annual reports, plus a few additional sources of data – a total of 12,848 records.  The data has been further proofed, standardized and aligned with modern scientific names/phenophase descriptions with the guidance and funding provided by our collaborators at Community Greenways Collaborative. Many different 'seasonal events' were included, from the blooming times of various flowers, through the arrival times of birds, to select agricultural milestones. They span a total of 46 years, from 1826 to 1872, though the bulk of the data was collected prior to the Civil War.  The data are not perfect. Academies came and went from the system; enthusiasm waxed and waned. The observers were only human and the methods only partially standardized.

We have not yet digitized the bulk of the meteorological (not to mention celestial) data. That would be interesting, but we would need to find some additional funding.  We will, however, continue to include additional phenology data as we find them.

The historical data that we have assembled can be accessed online through a data web browser.

The table below is derived from an early (1843) summary of the data. While incomplete, this summary gives you a flavor for what the data looked like and how it was used historically. Regent's data such as these show up in various publications of the time including the US Patent Office's agricultural reports (the Patent Office preceded USDA), almanacs such as The American Almanac and Repository of Useful Knowledge, and gazetteers like Mather and Brockett's A Geographical History of the State of New York (1848).

If you know of other pre-20th century data sources of phenological data or have comments or questions, please let us know. 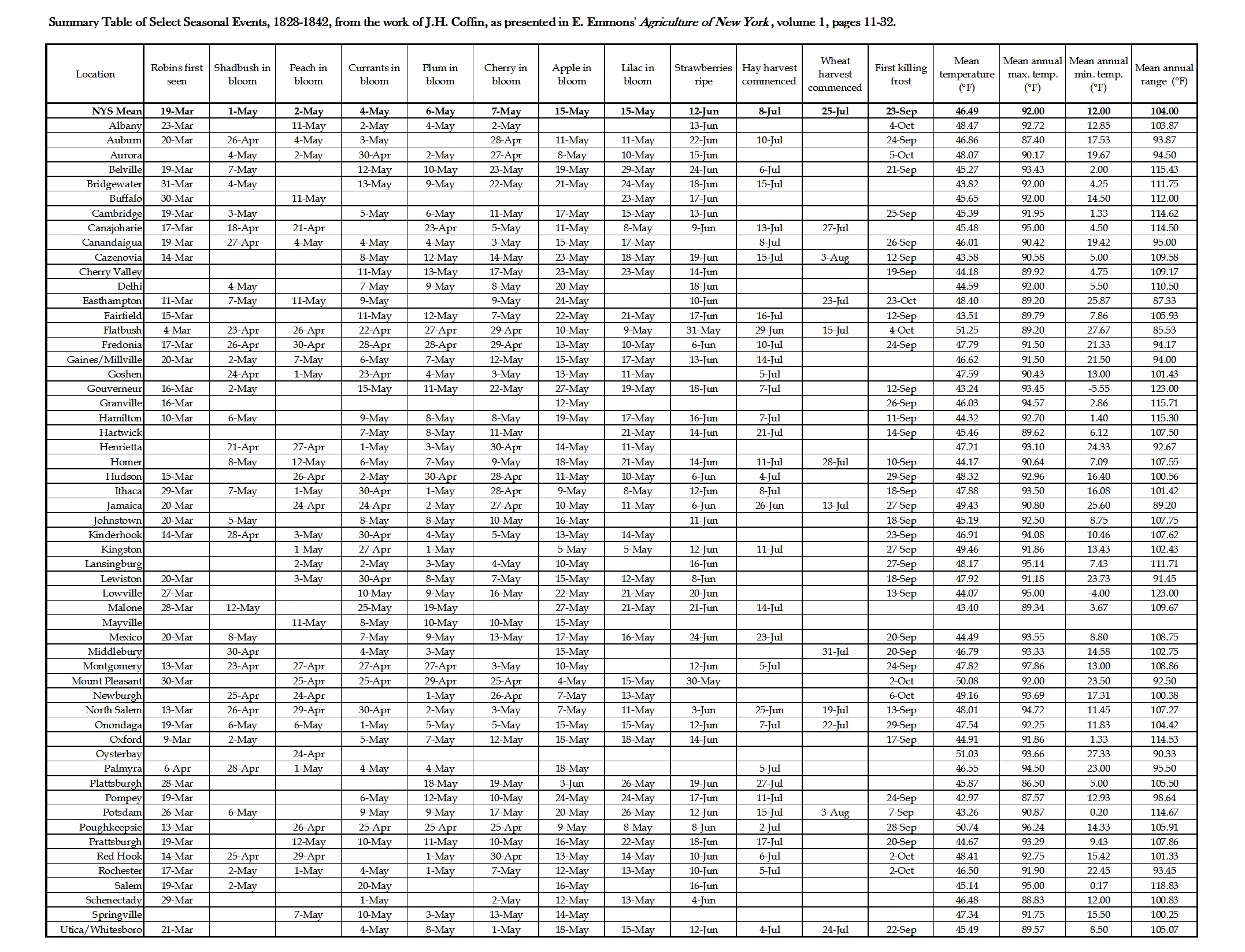 Table of early data from the network. This was a selection made for an 1843 publication, many more events were reported. (Click to enlarge.)

The Future of the Project

We have begun an exciting collaboration with the Community Greenways Collaborative (CGC), led by Kerissa Battle, which manages the New York Phenology Project (NYPP). NYPP  has facilitated the creation of over 30 phenology trails and monitoring sites at institutions in eastern New York. NYPP's goal is to get people involved in thinking about the effects of land use change and a changing climate on the nature of our seasons. This is a neat, hands-on present-day focus that pairs well with our historic emphasis. Our hope in working together is to keep that consciousness about today's natural history, while adding historic background data that lets participants think deeply about how things have or haven't changed. In the spring of 2017 we piloted a curriculum for high school students that combined the establishment and monitoring of a phenology trail with comparisons of historical phenology records using the historical data browser, and we look forward to carrying this work into other educational settings.  Meanwhile, we are working together to publish a paper comparing the historic and modern phenology data in New York - stay tuned!

We would also like to thank Dale McDonald, the founding supporter of FEP's participation in this Project!

The New York Phenology Project (NYPP) – part of the Community Greenways Collaborative that we are collaborating with on the Progress of the Seasons project and also the New York State affiliate of the National Phenology Network (see below); has some dandy resources for following the phenology of particular species and encouraging citizen science participation at schools and other public sites.

Field Guide to the Seasons - Local author Janice Goldfrank's nifty ibook guiding you through 19 seasons in the year, from Icicle Season through Blueberry Season and on into Oak Season.

Project BudBurst - A plant phenology project with lots of materials for teachers.

Richard Primack's Boston University web page and blog - Dr. Primack has been comparing Thoreau's phenology data with those of the modern day. A great side-by-side comparison for New York.